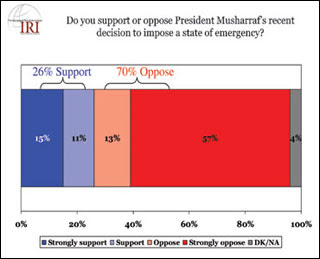 
Islamabad – The International Republican Institute (IRI) today released its survey of Pakistan public opinion. The poll was conducted November 19-28, 2007 and can also be found at www.iri.org .

On November 3, 2007, Pakistan President Pervez Musharraf, who was then Army Chief of Staff, declared a state of emergency and suspended the constitution. IRI's most recent poll found that voters overwhelmingly opposed this measure. Moreover, this opposition set the tone for the entire poll.

Musharraf's move polarized the country, and this polarization carries through the other attitudes and opinions of the Pakistani electorate. This line of polarization splits the electorate into two parts, at roughly the two-third and one-third divide. Throughout the poll, 25 to 33 percent remained supportive of President Musharraf and were positive about the condition of the country. Seventy-five to 66 percent expressed anger at the current state of affairs, desired change and were anti-Musharraf.

‧ Pakistanis also do not accept Musharraf's stated rationale for the state of emergency declaration. When given a choice between two options, 25 percent said that they thought Musharraf declared the emergency in order to better fight terrorists, while 66 percent said that it was to prevent the Supreme Court from overturning his re-election to another term as president.

‧ Voters were also opposed to the various measures that accompanied the state of emergency declaration.

‧When respondents were asked if they would consider elections held under a state of emergency to be free and fair, 24 percent said yes and 66 percent responded no.

Pakistanis are not positive about the current state of affairs. This negative feeling also shows-up in political and social indicators.

‧When asked if their personal economic situation improved or worsened in the past year, 25 percent said improved, 51 percent said worsened and 23 percent said that it stayed the same.

‧ Respondents also indicated that they are feeling more insecure; when asked if they felt more secure this year than they did last year, 27 percent said yes and 66 percent said no.

‧ The government also receives low marks. When asked how the government performed on issues most important to them, 31 percent approved and 68 percent did not. When asked if the ruling coalition had done a good enough job to deserve re-election, 24 percent said yes and 70 percent said no.

Overall, Musharraf's numbers remain low, with solid majorities opposing him. Again, the same polarization is evident in regards to the state of emergency.

‧ A majority of Pakistanis want Musharraf to resign from office, with 67 percent wanting his resignation and 25 percent opposed.

‧ This same polarization is seen in Musarraf's job approval rating as well, with 30 percent saying they approved of the job he was doing, while 60 percent said they disapproved; 41 percent were in the most intense category, saying that they strongly disapproved of his job performance.

‧ One of the effects that the declaration of an emergency had was to shore up Musharraf's base of support in areas traditionally loyal to him and the Pakistan Muslim League-Q (PML-Q). Support for Musharraf improved in rural Punjab and urban Sindh, both considered to be Musharraf strongholds. However, Musharraf's approval numbers remained stagnant or declined in most demographics.

‧ Musharraf also remains an unpopular partner when it comes to reconciliation; 60 percent opposed a deal between Musharraf and Bhutto while only 32 percent supported it, the highest level of opposition since IRI began testing this question in its poll released in April 2007.

‧ During the conduct of this poll, there was much speculation that Musharraf would resign as Army Chief of Staff, that he would lift the state of emergency and that elections would be held as scheduled. While the poll was in the field, Musharraf was trending upwards, and filed interviewers report that these potential events were often cited.

‧ In head-to-head match-ups, Bhutto topped the list with Sharif coming in second and Musharraf in third. However, over the course of the poll being taken, Bhutto's numbers were trending down, indicating that they had been higher.

‧ Sharif, on the other hand, trended upwards over the course of the fieldwork. IRI's last poll (August 29-September 13, 2007) was taken in the days leading-up to his first return and subsequent deportation, and Nawaz's numbers were very high. However, after he was deported, his numbers deflated, as is reflected in this most recent poll. IRI's fieldwork for this poll was largely completed before Sharif's most recent return and it does not capture the extent to which his popularity increased as a result. However, his numbers did tick up slightly in the portion of the fieldwork conducted after his return, indicating that he is now trending upwards.

‧ Also worth noting is Imran Khan's increased strength, likely due to his unrelenting anti-Musharraf stance.

‧ When asked who they thought was the best leader to handle the problems facing Pakistan, 31 percent chose Bhutto, 25 percent cited Sharif, and 23 percent said Musharraf.

‧ In terms of overall popularity, Bhutto and Sharif were tied, with each garnering 38 percent of the electorate saying that they had a favorable impression; Musharraf lagged behind with 28 percent. It is worth noting that the former Chief Justice of the Supreme Court Iftikhar M. Chaudhry has a 33 percent favorability rating and Imran Khan 20 percent.

The results of a hypothetical election match-up largely mirrored the positions of their respective party leaders. There is also evidence that one of the effects of holding the elections under the state of emergency would be a decrease in voter turnout.

‧ In a party vote election test, PPP topped the field, garnering 30 percent in the national sample. PML-N was second with 25 percent and PML-Q came in third with 23 percent.

The Pakistan Army has long been the most respected institution in the country; in IRI's first few polls its favorability rating was consistently at the 80 percent level. In the last poll, however, the Army's rating dropped 10 points to 70 percent and slipped to third behind the media and the courts. In this poll, the Army dropped 15 percentage points to a rating of 55 percent. The media remained on top with 78 percent.

Regardless of the attention focused on the unfolding political drama, bread and butter issues remain the top concern in the minds of Pakistani voters. When presented with a number of issues and asked to select which was the most important in determining which party they would vote for, 77 percent chose an economy related issue. Inflation was the top issue by far, having been selected by 53 percent of the respondents.

Voters also expressed concern regarding rising Islamic fundamentalism; 66 percent agreed that religious extremism was a serious problem in Pakistan. Further, 63 percent said that the Taliban and Al Qaida operating in the country was also a serious concern. However, only 40 percent of Pakistanis supported the Army operations in NWFP and Tribal Areas and just 15 percent felt that Pakistan should cooperate with the United States in its War on Terror.

Finally, respondents expressed a desire for the separation of military and state; 56 percent agreed that the Army should not play a role in civilian government and 74 percent said that Musharraf should resign as Army Chief of Staff.

For Charts and Graphs, click here
Posted by Hassan Abbas