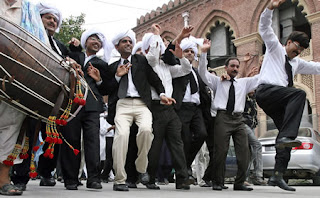 They carried no stones and they brought no rocks. All they had was flowers and petals. They threw no stones and they pelted no rocks. They drowned his car in flowers and they drenched him with petals. He neither danced nor sang. He neither said much nor heard much. Neither a Buddha nor a Sufi. But, he was kissed on the forehead and kissed on the cheeks. Kissed for what he had done.He went to Peshawar and he went to Multan. He rolled through Pakhtunkhwa and he rolled through Punjab. That's 300,000 square kilometres of Pakistan and that's where six crore Pakistanis dwell. Not all, but half of them came out. They came out to see neither an Ataturk nor a Mandela. They came out to see a Pakistani who had done it; did something that hadn't been done before. Said "no".

He was wearing neither a black coat nor carrying a party flag. In the heart of Islamabad he wandered like a wanderer; with a basketful of mithai. I had neither seen him before nor heard of him before. He did nothing but shoved a ghulab jaman through my teeth. Now, that's a first in my lifetime. Shoved it and went on. Neither waited for my thanks nor for my views. Shoved it and went on.

What's next? Trias politica; separation of powers. You do your things right. We shall do ours. You put your house in order. We'll put ours. Black robes have neither been a check nor an impediment; a 60-year nightmare. Nightmare becomes a dream. Dream shall take time but the Executive beware, there now is a check and an impediment. Yes, there will be constitutional deviations and, yes, there will be Executive indiscretions but not another 60-year nightmare. Yes, there is a new endangered species list; dual offices, controversial elections and monopolisation of power by the Executive. And, yes, Pakistan's civil society can take care of Pakistan's problems.

The writer is an Islamabad-based freelance columnist. Email: farrukh15@hotmail.com
Posted by Hassan Abbas