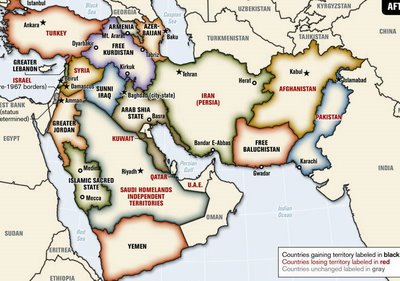 WASHINGTON: Muslim circles have expressed alarm and disgust at the publication of a redrawn Muslim world in a journal closely linked to the US armed forces.

The Armed Forces Journal, which has published the redrawn map of the world of Islam, along with a long explanatory article, is published by the Army Times Publishing Company, a part of Gannett Company, Inc, the world’s largest publisher of professional military and defence periodicals.

The proposed scheme places Pakistan on the chopping block. According to the plan, “Iran, a state with madcap boundaries, would lose a great deal of territory to Unified Azerbaijan, Free Kurdistan, the Arab Shia State and Free Balochistan, but would gain the provinces around Herat in today’s Afghanistan — a region with a historical and linguistic affinity for Persia. Iran would, in effect, become an ethnic Persian state again, with the most difficult question being whether or not it should keep the port of Bandar Abbas or surrender it to the Arab Shia State.

What Afghanistan would lose to Persia in the west, it would gain in the east, as Pakistan’s Northwest Frontier tribes would be reunited with their Afghan brethren Pakistan, another unnatural state, would also lose its Baloch territory to Free Balochistan. The remaining ‘natural’ Pakistan would lie entirely east of the Indus, except for a westward spur near Karachi.

The city-states of the UAE would have a mixed fate — as they probably will in reality. Some might be incorporated in the Arab Shia State ringing much of the Persian Gulf … Since all puritanical cultures are hypocritical, Dubai, of necessity, would be allowed to retain its playground status for rich debauchees. Kuwait would remain within its current borders, as would Oman.””

The redrawn map claims to “redress the wrongs suffered by the most significant ‘cheated’ population groups, such as the Kurds, Baloch and Arab Shia, but still fail to account adequately for Middle Eastern Christians, Bahais, Ismailis, Naqshbandis and many another numerically lesser minorities.” It adds that “one haunting wrong can never be redressed with a reward of territory: the genocide perpetrated against the Armenians by the dying Ottoman Empire.”

The author, Ralph Peters, argues that even those who abhor the topic of altering borders would be well-served to engage in an exercise that attempts to conceive a fairer, if still imperfect, amendment of national boundaries “between the Bosporus and the Indus.” According to him, “We are dealing with colossal, man-made deformities that will not stop generating hatred and violence until they are corrected. As for those who refuse to ‘think the unthinkable’, declaring that boundaries must not change and that’s that, it pays to remember that boundaries have never stopped changing through the centuries. Borders have never been static, and many frontiers, from Congo through Kosovo to the Caucasus, are changing even now.” He adds that “ethnic cleansing works”.

Peter argues that for Irael to have any hope of living in “reasonable peace” with its neighbours, it will have to return to its pre-1967 borders, with essential local adjustments for legitimate security concerns. He writes that the most “glaring injustice” between the Balkan Mountains and the Himalayas is the absence of an independent Kurdish state. There are between 27 million and 36 million Kurds living in contiguous regions in the Middle East. He calls Iraq an unnatural state and calls for a greater Kurdish state, which will include Turkish, Syrian and Iranian Kurds. A Free Kurdistan, stretching from Diyarbakir through Tabriz, would be the most pro-Western state between Bulgaria and Japan, he adds.

The author is of the opinion that a root cause of the broad stagnation in the Muslim world is the Saudi royal family’s treatment of Mecca and Medina as their “fiefdom.” With Islam’s holiest shrines under the control of the Saudis, they have been able to project their Wahhabi vision of a “disciplinarian, intolerant faith far beyond their borders.” The rise of the Saudis to wealth and, consequently, influence has been “the worst thing” to happen to the Muslim world as a whole since the advent of Islam, and the worst thing to happen to Arabs since the Ottoman — if not the Mongol — conquest. .

Peter writes, “While non-Muslims could not effect a change in the control of Islam’s holy cities, imagine how much healthier the Muslim world might become were Mecca and Medina ruled by a rotating council representative of the world’s major Muslim schools and movements in an Islamic Sacred State — a sort of Muslim super-Vatican — where the future of a great faith might be debated rather than merely decreed.

For the Source article, Blood borders: How a better Middle East would look By Ralph Peters in the Armed Forces Journal click here
Posted by Hassan Abbas

Since it ws the European colonial powers who, more or less, drew up the borders in the first place, it should come as no surprise that the Imperial US should be thinking about doing the same.