Was Nawaz Really Briefed on Kargil? 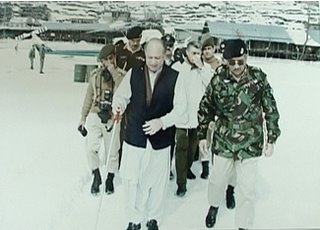 Exclusive by Daily Times, July 13, 2006
Nawaz was briefed on Kargil and he was on board: Musharraf
By Sarfaraz Ahmed, Hasan Mansoor and Farhan Sharif

KARACHI: President Pervez Musharraf has challenged former prime minister Nawaz Sharif’s allegations that he (Musharraf) did not take him into confidence on the situation in Kargil by presenting pictorial evidence of Nawaz Sharif’s visit to Kel in Kashmir in the south of Kargil and his briefing there by the army high command on February 5, 1999, before the visit of the Indian prime minister, Atal Behari Vajpayee to Lahore on February 19, 1999. The president was responding to allegations by Mr Sharif in a recently released book that that he (Sharif) first learnt of the Kargil ‘adventure’ from Mr Vajpayee.

In an exclusive interview with Business Plus Channel at the President’s Camp Office at Rawalpindi on Wednesday (Business Plus will be airing his wide ranging exclusive interview at 10pm Thursday July 13), General Musharraf spoke on a variety of issues but dealt also with the visual evidence which proved that the then prime minister was not only aware of the Kargil planning but that he had been briefed by the military commanders about Kargil plans in early February 1999. In his interview, General Musharraf held out four photographs showing Mr Sharif’s visit to Kel frontlines which took place on February 5, 1999, many days before the Indian prime minister’s visit to Pakistan on Feb 19 1999.

“Why had he gone to Kel at a time when all such things were underway. During heavy snow...what was the necessity that forced him to go to Kel?...One cannot do anything if someone is telling lies so consistently,” General Musharraf said.

Giving his account of the 1999 conflict in the book: “Ghaddar Kaun? Nawaz Sharif ki Kahani unki Zubani”, Mr Sharif has reiterated his contention that General Musharraf, the then army chief, did not take him into confidence on the situation in Kargil and that he learnt the details from his Indian counterpart, Atal Behari Vajpayee. “As a prime minister, I was not taken into confidence on Kargil. I came to know what the army was doing from Prime Minister AB Vajpayee. Even the Air and Naval chiefs as well as many corps commanders of the army did not know about the Kargil operation,” Sharif is reported to have said.

Referring to Mr Sharif’s claim, Gen Musharraf bluntly exclaimed: “A prime minister is not worth his salt if he is being informed about Kargil operation by his Indian counterpart.”

Without calling Kargil conflict a war, Gen Musharraf said Nawaz was aware of many facts about the Kargil issue and it was Kargil and the Mujahideen’s operation which immensely internationalised the Kashmir issue.

Sounding a note of warning, he said issues relating to Kargil were extremely confidential and of paramount national importance, and these should not be publicised in the way in which the former prime minister was doing so consistently.

“I would advise him to talk economically on this issue because it is an issue of great national confidentiality,” he said.

Tariq Hassan controversy: President Musharraf also held the former SECP chairman, Tariq Hassan, responsible for the March 2005 stock market crisis on the ground that Mr Hassan’s primary responsibility was to monitor and take preventive measures to avoid the fiasco in which he failed. “I personally asked for his dismissal,” the President said about the removal of Mr Hassan.

Claiming that he personally did not “know much” about the stock market, and had never traded, he said that by analysing the graph of the stock market from 2000 one can see that our stock market followed the international and regional market trends except last year, “which indicates some abnormal developments that led to the crisis.”

“Now Tariq Hassan who is raising such hue and cry was himself heading the SECP at that time,” he said. “It was his responsibility to monitor and prevent such things from happening. It was his duty to do it and now he is the one who is responsible.”

He said Prime Minister Shaukat Aziz was not involved in any form of corruption in relation to the Karachi Stock Exchange. “Nobody was shouting when the stock market was going up, but when it went down many became unhappy,” he said.

Inside Story about Musharraf-Mahmood Tussle Hassan Abbas : September 24, 2006 General Pervez Musharraf’s memoir In the Line of Fire is expected to generate a lot of debate and discussion in the days to come. Except some western journalists and Musharraf’s close friends (three ghost writers) hardly anyone has had a chance yet to read the book from cover to cover. The excerpts of the book leaked through Indian media and General Musharraf’s statements to some American media outlets however have already created some controversies. In the United States, controversy is considered a positive thing, so the book is bound to become a bestseller here, but in Pakistan probably the opposite is true. This article is not a review of the book (as I haven’t got hold of a copy yet), but it endeavors to throw some light on the widely reported Musharraf comment about the Armitage threat conveyed through Lieutenant General Mahmood Ahmed, the then Director General of the ISI. I had done research on t

Justice Chaudhry says only a free judiciary can provide justice By Irfan Ghauri: Daily Times, June 18, 2007 FAISALABAD: Chief Justice of Pakistan Iftikhar Muhammad Chaudhry has said that a society can progress only if it ensures the supremacy of the Constitution, which guarantees the rights of every citizen and defines roles for organs of the state. Addressing the Faisalabad Bar Association on Sunday, the chief justice said that the separation of the judiciary from the executive was vital and only a free judiciary could provide real justice. He quoted a saying of Hazrat Ali, the fourth caliph of Islam, that a “society can survive with kufr (infidelity), but not injustice”. “Every citizen must follow the Constitution. A society can progress only if it has supremacy of the Constitution,” peace and rule of law, he said. “We cannot get rid of the label of developing country without ensuring the security of the life and property of citizens,” he said. He said lawyers were fighting to e

The Politics of Countering Violent Extremism in Pakistan

Dynamics of Countering Violent Extremism in Pakistan and Beyond: A Conversation with Professor Qamar-Ul Huda Near East South Asia Center for Strategic Studies, National Defense University - August 2020 In the fifth segment of NESA South Asia Interview Series, Professor Hassan Abbas interviews Professor Qamar-ul Huda who is a non-resident fellow at The Atlantic Council in Washington, D.C and an adjunct associate professor at Georgetown University. He formerly worked as a senior policy advisor to the U.S. State Department Secretary’s Office. HASSAN ABBAS: Congratulations on your recent publication  “A Critique of Countering Violent Extremism Programs in Pakistan”  (Center for Global Policy, July 2020). What are the core findings from the report that are crucial for CVE practitioners today? What are your top 3-5 findings?