Showing posts from December, 2015
Show all

Fall & Rise of Taliban: A Lecture in Islamabad 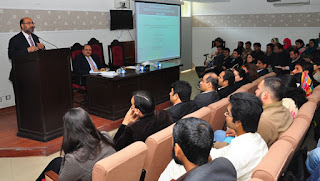 A lecture was organized under the SPIR Lecture Series on November 26, 2015 at School of Politics and International Relations. Dr. Hassan Habbas from National Defense University, Washington D.C. gave a lecture on “Are Taliban History: How and why they survived for over two decades in Afghanistan and Pakistan.” Director SPIR, Dr. Zafar Nawaz Jaspal formally started the session by the welcome address.

Dr. Hassan Abbas is a Pakistani-American academic in the field of South Asian and Middle Eastern studies. His research focuses on security issues pertaining to governance, law enforcement and counterterrorism in these regions. Dr. Abbas was a civil servant in Pakistan.

Dr. Abbas raised a major concern about the reasons of terrorism and the inability of Pakistan and Afghanistan to curb it…
5 comments
Read more

ISIS & The Future of Iraq: A Talk at the Habib University, Karachi

KARACHI, November 24, 2015: Habib University’s Yohsin Center for Social Development (YCSD) and Office for Global Engagement (OGE) hosted a Public Lecture with Dr. Hassan Abbas – Professor and Chair of the Department of Regional and Analytical Studies at National Defense University in Washington, DC. on November 24th. Bringing with him great insight into the examination of geopolitical roots of the expanding chaos in the Middle East as well as Saddam Hussein’s legacy, he led a riveting discussion at the Tariq Rafi Hall, this being the third and final lecture of the current semester at Habib University.

Led by the moderator of the Public Lecture, Dr. Hafeez Jamali, the event started off with an introduction of Dr. Hasan Abbas. Listing out his career trajectory, the moderator spoke of his profes…
1 comment
Read more

In June 2014 I witnessed thousands of Iraqis throng the offices of top Shia clerics in Najaf, including Grand Ayatollah Ali-al Sistani, asking for a religious injunction to proceed towards Mosul and fight the Islamic State. It was not a choreographed exercise. People were genuinely moved to make a difference.

A Jihad fatwa was indeed issued as a result encouraging Iraqis to join military for the purpose but the fervor — even though it mobilized thousands — was not a substitute for a coherent Iraqi policy to defeat the Islamic State.

As a result, Iraq now is bleeding to death at the hands of this vicious and fanatical group that is empowered by conflict in Syria, poor governance, and sectarian bigotry. It is difficult to deny that the US occupation inadvertently set it in motion. Since that day in Iraq, over ten thousand people have been brutally killed, ov…
Post a Comment
Read more

The Fight Against the Pakistani Taliban: Consequences

December 10, 2015
The Fight Against the Pakistani Taliban: What Are the Costs?

In December of 2014, the Pakistani Taliban waged a brutal assault against an army-run school in Peshawar, leaving 145 people dead — 132 of them uniformed school children.

It was the deadliest single attack in the history of the Pakistani Taliban — known also as the TTP — prompting the government to bolster military efforts to beat the group back.

These military campaigns, however, have brought unintended consequences, as some militants have been driven from strongholds in North Waziristan, South Waziristan and the Swat valley, and taken refuge in the slums of Karachi, a city of more than 20 million people.

This migration has shifted a growing share of the burden of fighting the Taliban from the army, to local police units, often in conjunction with a paramilitary force known inside Pakistan as the Rangers. Police and the Rangers have helped drive down violence against citizens in Karachi, but…
Post a Comment
Read more
More posts