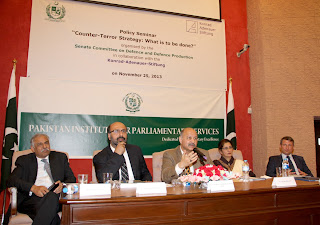 ISLAMABAD: Law Enforcement Model and mutual coordination among Law Enforcement Agencies are the fundamental tools towards countering the prevailing challenge of terrorism. Institutional policy support and relatively effective judicial practices must be brought together to resolve counter terrorism strategy mechanism. This was said by the speakers at the seminar on “Counter Strategy: What is to be done” which held today at Pakistan Institute of Parliamentary Studies (PIPS)”.

The policy seminar, organized by Senate Defence Committee was addressed by various think tanks, policy makers, diplomats and academia. In his welcoming address, Senator Mushahid Hussain Syed Chairman Senate Defence Committee said Pakistan was going through a phase where all the stakeholders have to have collective inputs towards the solution. Referring to Sri Lankan long war against Tamil Tigers, he said Pakistan can get benefit from the experience of a nation who fought with the menace of terrorism with determination and willpower. Professor Dr. Hassan Abbas, National Defence University Washington DC, in his presentation highlighted the key points of the required strategy mechanism in the given circumstances Pakistan is facing. He introduced a ‘Law Enforcement Model L(EM)’ according to which understanding to the nature of prevailing challenge, strong policing and effective and strong coordination among the LEA’ are the focal areas to be worked out. Dr. Hassan, while appreciating the great sacrifices laid by the security agencies said Pakistan had a policy framework and intensive commitment to counter terrorism. However he noted there was lack of institutional policy support and structural division of LEAs at execution levels. He suggested for the key role be given to the LEAs with backup of military forces and punishment & imprisonment culture.

Seema Baloch, former High Commissioner of Pakistan to Sri Lanka delivered her findings of successful experience by Sri Lankan government in countering Tamil Tigers. She said Sri Lanka had experience international pressure and also hostile support to Tamil Tigers, but they remained committed and dedicated to get rid of the terrorists. However she maintained that Pakistan’s case was different to that of Sri Lankan. But still she urged for the unanimity, political will and clarity of the objective. Tariq Pervez, ex Chairman National Counter Terrorism Authority (NACTA), shared his experience regarding effectiveness and the weakness of NACTA. He suggested that political influences must be eradicated from the organization and sole authority should be given to the Prime Minister. Senators, Haji Adeel, Afrazyab Khattak, Tahir Mashadi, Generals (R) Asad Durani, Talat Masood and former foreign Secretary Akram Zaki also spoke on the occasion. The seminar was attended by a number of diplomats, journalists, think tanks and academia. APP/ Hamza 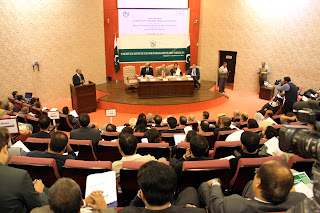