Showing posts from October, 2013
Show all

Sharif in the Wonderland 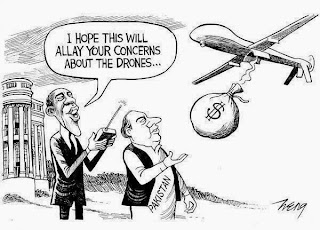 "The U.S. drone strike policy is increasingly becoming a divisive issue between the two states, and this is likely to continue till Pakistan takes effective counterterrorism steps on its Pushtun frontier," Abbas told Asia Blog.

Abbas also noted that the U.S. will…
Reactions:
Read more

- October 21, 2013
How our entire history was dumped in a horse stable
Majid Nawaz,Dawn, October 6, 2013
Away it went in ignominy, on hundreds of wheelbarrows to be dumped in a dirty, humid and putrid discarded horse stable. I am talking about one of the world’s finest, and surely the second largest collection of rare books, manuscripts and document dealing with the history of Punjab, from Kabul to Delhi and from Kashmir to Sindh over the last 500 years.

In the old horse stable of the Lahore Civil Secretariat, in dark, moldy, dingy conditions, lies this amazing collection, all official record let me clarify, of over 70,000 rare books and under one million rare manuscripts and documents, piles upon piles, on the floor, on old broken desks, in cupboards without glass panes. The stink and humidity overwhelms the senses. Only in the British Museum Library of London is there a better collection, all kept in mint condition. They respect our rich history. In terms of our own history, we are the wretched of the ea…
Reactions:
Read more

MALCOLM Gladwell in his latest book David and Goliath writes about the relevance of the inverted U-curve to violence. Using the example of North Ireland and other data from criminologists he argues that, “there comes a point where the best-intentioned application of power and authority begins to backfire”.

In other words the application of force up to a certain point bears positive results after which it plateaus and then comes the downward spiral where use of force actually makes things worse.

The inverted U-curve argument seems logical. In the context of violence and terror, it rests on the concepts of rational actors and deterrence on the one hand and limits of power and state legitimacy on the other. The upward spiral in the inverted ‘U’ is explained by the fact that humans are rational beings and their cost-gain analysis influences their behaviour. Thus if a criminal feels that there is high probability of getting caught and reasonable…
Reactions:
Read more

Malala - A Pakistani Trailblazer for Global Education and Women Rights

When Malala Yousafzai woke from the coma the Taliban put her in, she was aware of only a few things.

“Yes, Malala, you were shot,” she told herself.

She thought back to her dreams – of lying on a stretcher, being in some distant place far from home and school – and realized that they weren’t dreams, but recollections.

“The nurses and doctors, everyone was speaking in English,” she recalls. “I realized that now I am not in Pakistan.”

All Malala Yousafzai wanted was to go to school.

But she lived in an area of Pakistan, the Swat Valley, where the Taliban had effectively taken over governance, and imposed its harsh ideology – of no music, no visible women, and certainly no girls in school.

For defying their will, and refusing to stay silent…
Reactions:
Read more
More posts