Showing posts from May, 2013
Show all

Education Suffers in Pakistan's FATA: Who is Responsible ?

May 23, 2013
Education in crisis: No respite for Mohmand Agency students
By Mureeb Mohmand, Express Tribune, May 23, 2013

SHABQADAR: Pakistan spends seven times more on military expenditure than on education, according to a 2012 Unesco report. It ranks 113 out of 120 countries in the Education Development Index.

It then comes as no surprise rural areas get the short end of the stick. Basic provisions such as rooms to sit in, clean water to drink and running water in toilets are not a given; students do not expect these luxuries.

An official in the education department in Khyber-Pakhtunkhwa estimates around 15% of the population of the Federally Administered Tribal Areas (Fata) is literate. Possibly, less than 5% of females in the tribal belt are educated.

The situation in Fata is further compounded by militancy – schools in Fata remain under constant threat. According to a news report, over 100 schools have been destroyed by militants in Mohmand Agency.

This weekend Pakistan is slated to have its first transition of power between civilian governments in its 66-year history, but the lead-up has not been smooth. Violence, a kidnapping, and an accidental fall by one of the frontrunners for prime minister have all added to the already inherent drama of a major election. Asia Society Senior Advisor Hassan Abbas, who served in the administrations of Prime Minister Benazir Bhutto and President Pervez Musharraf has been following the election closely and offered his insights into this weekend's voting. What is the major takeaway you’ll be looking for from these elections? I think there are four major things that we are looking at. First and foremost is voter turnout, which has been threatened by the Taliban and some other extremist groups by using force to harass people. The important indicator of success of democracy will be wheth…
Post a Comment
Read more 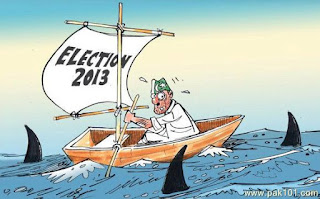 Herald Exclusive: PML-N PTI are Neck to Neck
However, expert survey indicates that PML-N and PPP are ahead of PTI in the election race
Saba Fatima Mirza and Faiza Shah
May 8, 2013

The May 11 election appears too close to call, with two main contenders enjoying almost the same voter approval ratings and the third one being not very far behind, the results of an exclusive public opinion poll conducted by the Herald magazine show.
A very high 95.1 per cent of the 1285 poll respondents say they are registered to vote and 25.68 per cent of these registered respondents say they intend to vote for Pakistan Muslim League-Nawaz (PMLN), 24.98 per cent of them say their vote will go to Pakistan Tehrik-i-Insaf (PTI) and another 17.74 per cent want to vote for Pakistan Peoples Party (PPP).

In Punjab, where more than half of all National Assembly contests will take place, PMLN seems to be the party of choice, with 38.66 per cent of the respondents indicating support for it, followed by PTI at 30.46 p…
Post a Comment
Read more
More posts