Showing posts from March, 2013
Show all

How to Defeat Sectarianism in Pakistan: Atlantic Council Event

Hassan Abbas, professor of international security studies at National Defense University; and Knox Thames, director of policy and research at the US Commission on International Religious Freedom visited the South Asia Center on March 13 to discuss ethnic and sectarian violence in Pakistan.

Summary:
The speakers addressed the dire domestic security situation facing Pakistan in light of recent growing targeted killings and ethnic violence, and offered their advice to the country’s leaders and the international community. Expressing concern over an inadequate response by the government, Mr. Thames stated the need for more visible consequences for perpetrators and suggested international engagement with the provinces, beyond the federal level in Pakistan. Dr. Abbas, citing an unprecedented 34 attacks on Sufi shrines, underscored the widespread nature of this problem affecting everyday Paki…
1 comment
Read more

Afghanistan - Pakistan Debates: An Ideas Whose Time Has Come

In the first show of a series of Afghanistan-Pakistan debates, On Soy-e Marz, or, Across the Border, TOLOnews and Pakistan's Express TV jointly discuss how the two countries can move forward in fight against terrorism, with panelists in Kabul and Islamabad studios.

Dozens of civil society activists and journalists accompany both panels in the two capitals.

What Really Happened in Afghanistan ?

March 18, 2013
The REAL reason the U.S. failed in Afghanistan Stephen M. Walt, Foreign Policy, March 15, 2013
Why did the U.S. fail in Afghanistan? (I know we are pretending to have succeeded, but that's just camouflage to disguise what is in fact an embarrassing if predictable defeat). The reasons for our failure are now being debated by people like Vali Nasr and Sarah Chayes, who have offered contrasting insider accounts of what went wrong.

Both Nasr and Chayes make useful points about the dysfunction that undermined the AfPak effort, and I'm not going to try to adjudicate between them. Rather, I think both of them miss the more fundamental contradiction that bedeviled the entire U.S./NATO effort, especially after the diversion to Iraq allowed the Taliban to re-emerge. The key problem was essentially structural: US. objectives in Afghanistan could not be achieved without a much larger commitment of resources, but the stakes there simply weren't worth that level of commitment. In other w…
1 comment
Read more

March 05, 2013
Sectarian and Ethnic Violence Escalates in Pakistan By Catherine Cheney, World Political Review, Trend Lines, March 5, 2013 A bomb blast in a Shiite district of Karachi, Pakistan, killed at least 45 people Sunday in the latest example of escalating sectarian and ethnic violence in the country.

Hassan Abbas, a former Pakistani government official who is now an academic and a senior adviser to the Asia Society, told Trend Lines that relations between South Asia’s Sunni and Shiite Muslim communities have historically been cordial, but that the recent uptick in sectarian attacks is linked to growing tension and violence in the region more generally.

“Religious bigotry, ignorance, ethnic tensions and regional tensions are driving this trend,” Abbas said in an email interview. “Many religious institutions with political agendas are teaching lessons of hatred while sectarian tensions in Middle East are also having an impact,” he said. “In both Quetta and Karachi, where recent terrorist attac…
Post a Comment
Read more

Islam Without Sectarianism - A Conference in Malaysia 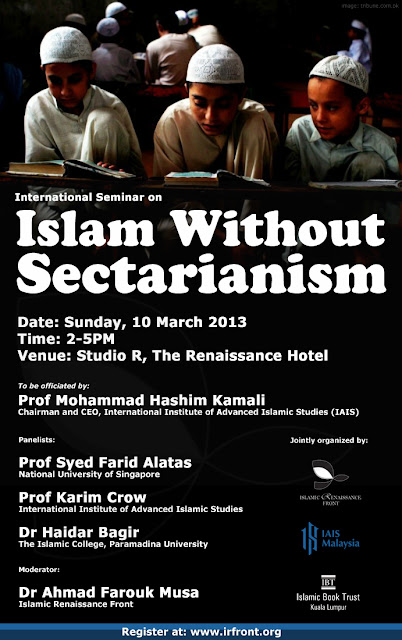 And hold fast, all together, unto the bond with God, and do not draw apart from one another.
And remember the blessings which God has bestowed upon you: how, when you were enemies,
He brought your hearts together, so that through His blessing you became brethren; and [how,
when] you were on the brink of a fiery abyss. He saved you from it. In this way God makes clear His
messages unto you, so that you might find guidance.
[Al-i Imran, 3: 103]

It seems that God’s reminder in the Qur’an has befallen onto many deaf ears. Despite claiming to be the defenders of sunnah, many fell prey to the venomous doctrine of sectarianism. The fires of sectarianism schism are stoked for political means and many are unable to think through the real
world. How do we claim to adhere …
Post a Comment
Read more
More posts