Showing posts from December, 2012
Show all 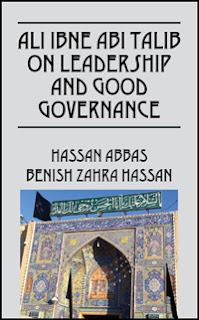 'The Service of Mankind Prepares a person for Leadership"
- Ali Ibne Abi Talib
This book is a collection of Imam Ali Ibne Abi Talib's policy statements on the role and responsibilities of political leadership for good governance. Important administrative policy initiatives taken by Imam Ali and his guidelines for effective government as advocated in his writings and lectures to various governors and senior officials are the primarily focus of this work. The work benefits from extensive research and a reference is provided for every statement. Language has been kept simple while remaining loyal to the original tone, as authors have young readers in mind. Imam Ali was both an educationist and a practitioner. His writings and speeches, especially during his time as Caliph (656 - 661 A.D), speak volumes about his progressive political vision. A just order founded on rational th…
1 comment
Read more

Pitfalls of a 'Peace Deal' with Taliban in Afghanistan: An Informed Indian View

As we approach closer to 2014, negotiations with the Taliban are gaining importance over other tracks, such as reconciliation and regional relations. To some extent this development was predictable: no successful transition/exit, however low the bar was set, would be possible without settling the Taliban question in one way or another. The military route failed: it remains to be seen whether the negotiations route can work.

Two recent events give an indication of the pros and cons for negotiations: the talks with the Taliban in France a week ago, and a leaked High Peace Council proposal entitled “A Roadmap for 2015,” dated November 2012. The Chantilly talks offered an opportunity for the Taliban to put forward their views publicly, and can be seen as repres…
Post a Comment
Read more 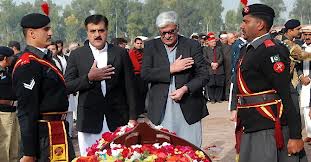 Whether it was the bombings in Peshawar in the 1980s or the siege of the city’s Shia in 1992, Bashir Lala would always be on the frontline

The Awami National Party (ANP) has lost one of its bravest leaders. Senior provincial minister of Khyber Pakhtunkhwa, Bashir Ahmed Bilour was martyred this past weekend. One of his party colleagues and a fellow Peshawari said, “The lion of Peshawar has been slain.”

Bashir Ahmed was born on August 1, 1943 in the walled city of Peshawar in mohallah Hodah inside the old Ganj gate to Bilour Din sahib. He came from the prominent business and trader family of Peshawar called the Kalals. To my generation he was Bashir Lala, or the elder brother, but to his peers and most of the common Peshawaris, he just remained Bashir jan — the dear Bashir. The bereaving Peshwaris are lamenting: Bashir jan tannay barri ziyadti keeti aiy (this is not fair Bashir jan)

The Inside Story of Negotiations with Taliban - 2012

Dampening expectations, the two-day long intra-Afghan discussions held near Paris ended Friday with more questions than answers about the future of the peace and reconciliation process deemed critical for Afghanistan's stability and a successful transition process following the US and Nato military disengagement scheduled for 2014.

For the second time in a year, envoys from the Taliban leadership Council (also known as the Quetta Shura) came face to face with two dozen representatives of the quasi-governmental High Peace Council (HPC), main political opposition groups, the parliament and civil society. This was the third such gathering, part of a track II initiative organized by the Paris-based Foundation for Strategic Research (FRS) and backed by the French Government.

Asia Society Report on the US Policy Towards South Asia 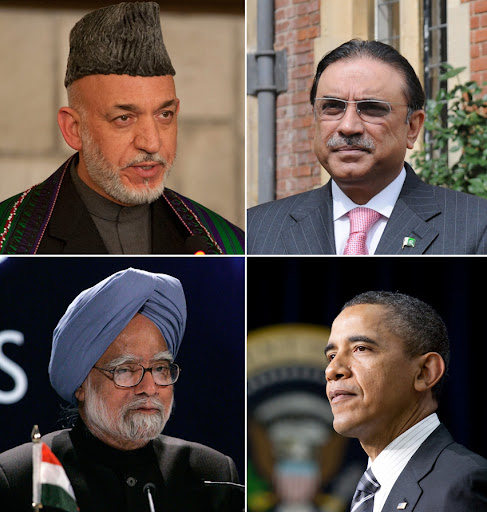 The Asia Society report, The United States and South Asia after Afghanistan, finds that a unique opportunity exists for the Obama administration to forge a more strategic, integrated, and successful policy toward South Asia. The report, written by Asia Society Bernard Schwartz Fellow Alexander Evans, offers new ideas on how to integrate competing U.S. interests in South Asia, encourage stronger interagency collaboration across the East Asia-South Asia divide, and expand expertise on South Asia in the U.S. government.

According to the report, the United States will best position itself for success after the 2014 military drawdown in Afghanistan by taking a fresh approach to South Asia that considers each country on its own merits and avoids hyphenated “Indo-Pak,” “Af-Pak,” or “China-India” policies; thinks regionally about economic, security, and political issues; connects South Asia to an overall Asia …
Post a Comment
Read more

Why al-Qaeda finds no recruits in India - An Important Question

Habiba Ismail Khan can't forget the day her eldest son ventured out to get food and water.

Their Mumbai slum had been overcome by communal rioting, sparked by the destruction of the Babri Mosque by Hindu hardliners in faraway Ayodhya.

This week marks the 20th anniversary of that event, one of the biggest tests since independence of India's secular ideals.

After days trapped inside, the sounds and smells of killing around them, he made a dash for supplies.

Caught by a Hindu mob he never had a chance.

He was one of nearly 600 Muslims killed in the Mumbai riots, the bulk of the victims. At least 275 Hindus died too.

But far from being spontaneous, a government commission later concluded much of the violence was an organised pogrom by Hindu extremists.

Cameron Munter, the formerU.S. ambassador to Pakistan, looked suntanned, but not rested, as he sat in a Foggy Bottom bar a few blocks from the State Department on a fall evening. He placed an Islamabad Golf baseball cap on the table, a souvenir from a decades-long career that had recently ended in a public flameout.

This past May, it was announced that Munter would be leaving his post. At the time, a State Department spokesman said he had made “a personal decision” to step down. But a few weeks after the announcement, The New York Times—in an article about counterterrorism policy—quoted one of Munter’s colleagues saying the ambassador “didn’t realize his main job was to kill people.”

The Program: The Stanton Nuclear Security Fellowship (SNSF) Program, made possible by a generous grant from the Stanton Foundation, offers younger scholars studying nuclear security issues the opportunity to spend a period of twelve months at the Council on Foreign Relations’ (CFR) offices in New York or Washington, DC, conducting policy-relevant research. CFR awards up to three fellowships annually. While in residence full time at CFR, fellows will be expected to lead a project of their own design, conduct original research, and write at least one policy relevant document. The scholars selected as SNSFs will be mentored by the fellows of CFR’s David Rockefeller Studies Program.

Eligibility: Qualified candidates must be junior (non-tenured) faculty, post-doctoral fellows, or pre-doctoral candidates from any discipline who are working on a nuclear security related issue. The program is only open to U.S. citizens and permanent …
Post a Comment
Read more

Prof Hassan Abbas of the US National Defense University, whose erudite writings on Pakistan police reforms have been discussed by me in these columns, has released a new report, "Stabilizing Pakistan through Police Reform" on behalf of Asia Society's "Independent Commission on Pakistan Police Reform", for which he was the project director. Nineteen chapters in this compendium discuss measures for improving police-public relations, upgrading professionalism in tackling crime and terrorism, effecting legal reforms, improving military-police relationship, organising a de-radicalisation programme, developing sensitivity to human rights and improving media relationship. Written by policemen, lawyers, academics and human rights activists, the report seeks to place police reform as a …
Post a Comment
Read more
More posts