Showing posts from October, 2012
Show all

ISLAMABAD: Ruling that the 1990 polls were rigged, the Supreme Court on Friday directed the government to take action against former army chief Gen (retd) Mirza Aslam Beg and former chief of the Inter-Services Intelligence (ISI) Lt Gen (retd) Asad Durrani for violating the Constitution by manipulating the 1990 general elections.

In another historic judgment, the court ruled that both Durrani and Beg brought a bad name to Pakistan and its armed forces as well as secret agencies in the eyes of the nation. “Notwithstanding that they may have retired from service…
1 comment
Read more

What Obama should do in Afghanistan - An Indian Diplomat's Perspective

October 17, 2012
Obama should take the road not taken…By M K Bhadrakumar, Pakistan Today, 17 Oct 2012  Preoccupation with geopoliticsThe forthcoming visit of the United States Deputy Secretary of State William Burns to New Delhi should provide the Indian side an opportunity to have an in-depth discussion on Afghanistan. The point is, President Barack Obama is expected to revisit the Afghan strategy soon after the November 8 election in the US.Delhi needs to structure its talking points regarding Afghanistan with foresight and wisdom. There is an avalanche of despondency today visible in the recent US discourses regarding Afghanistan.Most assessments are gloomy but of course the stunning weekend editorial by The New York Times outstrips them all — demanding the complete, unconditional, total withdrawal of US troops from Afghanistan by end-2013 i.e., an year ahead of the anticipated drawdown through end-2014.The NYT even recommends that the US should destroy its high-tech weapons rather than leave them b…
1 comment
Read more

The Malala Moment in Pakistan 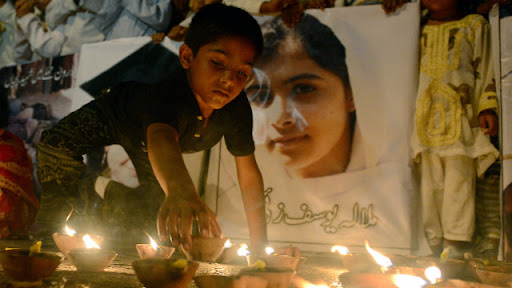 I had the privilege of following Malala Yousafzai, onand off, for six months in 2009, documenting some of the most critical days of her life for a two-part documentary. We filmed her final school day before the Taliban closed down her school in Pakistan’s Swat Valley; the summer when war displaced and separated her family; the day she pleaded with President Obama’s special representative to Afghanistan and Pakistan, Richard Holbrooke, to intervene; and the uncertain afternoon she returned to discover the fate of her home, school and her two pet chickens.

A year after my two-part documentary on her family was finished, Malala and her father, Ziauddin, had become my friends. They stayed with me in Islamabad. Malala inherited my old Apple laptop. Once, we went shopping together for English-language books and DVDs. When Malala opted for some trashy American sitc…
2 comments
Read more

ASK any Pakistani which government department he fears and distrusts most, and almost invariably, the answer you’ll get is the police.

These custodians of law and order are charged with everything from corruption to cruelty to gross incompetence. As we all know, these accusations are well-founded.

And yet, reviled as it is, our police force is being asked to do the impossible. Denied adequate resources, with virtually no political or public support, and an outdated legal and administrative structure, the police are tasked with tackling vicious terrorist and criminal gangs.

These criminals are not only far better armed and more highly motivated than the police, they are also secure in the knowledge that even if they are arrested, the chances of getting released on bail — or winning an outright acquittal — are very high.

Currently, around 1.4 million cases are pending in courts across the country, including the Supreme Court’s b…
Post a Comment
Read more
More posts