Showing posts from August, 2012
Show all

Pakistan’s Taliban Nightmare Pakistan, key to Afghan security, seeks political agreement that protects its interestsZahid Hussain
YaleGlobal, 23 August 2012
ISLAMABAD: Contrary to the general perception, Pakistan is not pushing for the return of Taliban rule in Afghanistan. Instead, the prospect of the Taliban taking over the war-torn country after the pullout of foreign forces is the biggest nightmare for the Pakistani security establishment.

A major worry is that Taliban control next door would give a huge impetus to Pakistan’s own militants seeking to establish retrogressive rule in the northwestern border regions. This would also make fighting local Taliban more difficult for the Pakistani Army.

Thousands of Pakistani troops are battling the militants for control of lawless border regions in northwestern Pakistan. Despite some successes, government forces have yet to establish their writ over the territory that also provides sanctuaries to Afghan insurgents. “If they [NATO forces…
2 comments
Read more

The India-Iran-Afghanistan Triangle of Influence

At the sidelines of the 16th Non-Aligned Movement (NAM) Summit in Tehran, Iran, the governments of Afghanistan, India and Iran will hold a small conclave. Commercial issues are at the top of the agenda. Not far down the list, however, are significant political matters. These are of great interest as the Israelis and the United States power up their aircraft for a bombing raid on Iran’s Fordo nuclear bunker, and as the US and North Atlantic Treaty Organization (NATO) begin their obligatory withdrawal from more than a decade-long occupation in Afghanistan.

Geography is one of the greatest reasons for the trade between these countries. In May, Afghanistan's Commerce and Industries Minister Anwar al-Haq Ahady and Iran's Ambassador to Afghanistan Abolfazl Zohrevand signed an agreement to deepen the trade ties between these countries. The main issue before them was use of the Chabahar port in southeastern…
1 comment
Read more

The aim of this scholarly blog is to develop a platform bringing together social scientists interested in Sindh, a region located in southern Pakistan, and its diaspora, mainly in India. The goal of our study group is to share and disseminate a wide range of information on the evolution of Sindhi society while exploring the interrelated dynamics in the religious, political and cultural arenas.

VISIT: http://sindh.hypotheses.org/
From the Blog: Book launch in Karachi,
November 7, 2011 By Rémy Delage

The book by Michel Boivin, Artefacts of Devotion. A Sufi Repertoire of the Qalandariyya in Sehwan Sharif, Sindh, Pakistan, was launched on 28th of October 2011 at the Alliance Française de Karachi (AFK). Read the book description from the official website of OUP in Karachi:

“Sindh, the land and the river which gave its name to the subcontinent, is a region rich in history with a distinctive cultural heritage. I…
Post a Comment
Read more

Understanding the Legacy of General Zia in Pakistan 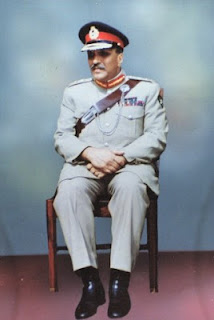 In Praise of Zia
The Quaid-e-Azam and Ziaul Haq were two leader­s who knew what Muslim­s wanted and gave it to them.
By Aakar Patel, Express Tribune, August 18, 2012

The writer is a columnist. He is also a former editor of the Mumbai-based English newspaper Mid Day and the Gujarati paper Divya Bhaskar aakar.patel@tribune.com.pk

This past week marked two anniversaries, that of Pakistan’s birth and that of President Ziaul Haq’s death.

Zia is a strange figure. Reading about him in Pakistan’s English press one would think that he is hated by most Pakistanis. Daily Times, in its editorial of August 15 said: “So-called Islamisation, starting from Zia’s era, has reduced the state and society to being entrapped by religious intolerance and lack of direction.”

This is typical and Zia tends to pick up the blame for conditions in Pakistan’s society.
But the fact is that the Hudood laws remain on the books. Pakistan Studies and Islamiat also remain in textbooks.

Principles of Good Governance in Islam

August 11, 2012
Good Governance Early Muslim Style
By Patricia Lee Sharpe, Whirled View,  06 September 2010
This piece, which I posted to counter anti-Muslim hysteria during the Bush administration, is probably even more relevant today, when political convenience and ignorance are combining to create a toxic environment for Muslims in America.

Ali bin Abi Talib, the fourth Caliph and son-in-law of the Prophet Mohammed, wrote a long letter of guidance after appointing Maalik al-Ashtar to be Governor of Egypt. He advises the new governor that his administration will succeed only if he governs with concern for justice, equity, probity and the prosperity of all.

The passages excerpted below illustrate the timeless applicability of Hazrat/Imam* Ali’s admonitions. The letter itself is contained in the Nahjal Balaagha, which is a collection of the letters and speeches of the fourth Caliph.

Manifest religious tolerance: Amongst your subjects there are two kinds of people: those who have the same religi…
Post a Comment
Read more

Neo-Sectarianism in the Muslim World

The Muslim world has had its share of sectarianism in the past but its modern incarnations pose a different set of challenges. Neo-sectarianism is different from the medley of traditional theological and juridical differences among Muslims. It is primarily an ideological and geo-political phenomenon. Neo-sectarianism among Sunnis and Shias is increasingly becoming part of the new proxy wars in the Middle East, running the risk of an intra-Muslim cold war. The good news is that the vast majority of Sunni and Shia Muslims do not see themselves as soldiers of a sectarian war. The bad news is that historical grievances and theological differences are manipulated to raise tensions. Neo-sectarianism is thoroughly political and driven by a mixture of what Ibn Khaldun called ‘asabiyyah, which means group solidarity, identity politics and power struggle. When misused, ‘asabiyyah can lead to division …
Post a Comment
Read more
More posts