Showing posts from January, 2012
Show all

A Review of Nine New Books on Afghanistan

The United States and its allies today find themselves in a position in Afghanistan similar to that of the Soviet Union in the late 1980s, after Mikhail Gorbachev decided on military withdrawal by a fixed deadline. They are in a race against the clock to build up a regime and army that will survive their withdrawal, while either seeking a peace agreement with the leaders of the insurgent forces or splitting off their more moderate, pragmatic, and mercenary elements and making an agreement with them. The Soviets succeeded at least partially in some of these objectives, while failing utterly to achieve a peace settlement.

To date, that is just about true of the West as well; and while international support for the US position is much stronger than it was for the Soviets, our Afghan allies are much weaker and more fissiparous than theirs. Our Taliban enemies have been much more worn down militari…
Reactions:
Read more 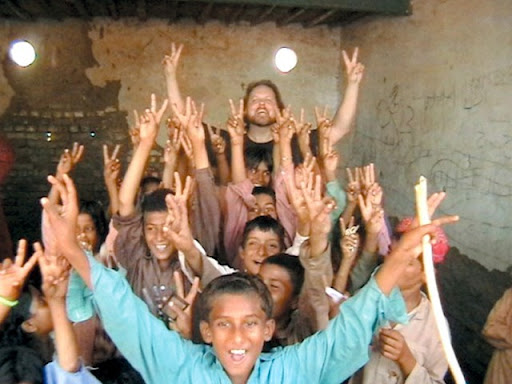 LAHORE:
Musician Todd Shea has developed a reputation for being the ‘go-to guy for relief’, an accolade that has come with his unique dedication for helping out with disasters around the world from places like Sri Lanka and India to Japan and Pakistan. His life and work make for a great narrative as he traipses all over Pakistan with medicines and music to bring not only physical relief, but emotional and psychological too. The Express Tribune caught up with Pakistan’s knight in musical armour to discuss his vision and work for the future.

What was the vision for the Sonic Peacemakers at the project’s outset?
It was to make music with Pakistani musicians and highlight my relief work in the country and use music to open up people’s hearts so that they could see the truth about Pakistan. The American media never talks about their responsibility towards the people here. Our foreign policy has gone fro…
Reactions:
Read more

"Dealing with Pakistan's fears on water" - An Indian Perspective

The best reassurance that Pakistan can have is full Indian compliance with the provisions of the Indus Waters Treaty. This article is not about the complex political or strategic reasons that the water establishment in the government and/or the army in Pakistan may have for projecting water as a new core issue between that country and India, nor is it about the jihadists' adoption of water as a cause, their threats of bloodshed over the alleged denial of water by India, and the influence that these may have on the general public. It is about the concerns expressed by saner voices in Pakistan. Some of these may be based on misperceptions or misinformation, but they need to be taken note of. The major water-related concerns of thoughtful people in Pakistan are briefly elucidated below.

The general lower-riparian anxiety vis-à-vis the upper riparian is accentuated in this case…
Reactions:
Read more

Pakistan once more finds itself enveloped in overlapping crises. Daggers are drawn between the civilian government and the military brass; the Supreme Court is reviving corruption allegations against President Asif Ali Zardari; the Taliban and other militant groups continue to carry out suicide bombings and assassinations at will; and the economy is in dire straits.

Added to which relations between Pakistan and its most important partner, the United States, are at their lowest ebb in years, according to long-time observers of the relationship. This week, Ambassador Marc Grossman, the State Department’s lead diplomat on Afghanistan and Pakistan, is visiting several countries in the region – but not Islamabad, at the Pakistanis’ request.

"His visit could fuel anti-American sentiments and create trouble for the government which is already surrounded by storms", a Pakistani official told CNN.

One of those …
Reactions:
Read more

Iran and the Nuclear Crisis

THE debate over how to handle Iran’s nuclear program is notable for its gloom and doom. Many people assume that Israel must choose between letting Iran develop nuclear weapons or attacking before it gets the bomb. But this is a false choice. There is a third option: working toward a nuclear weapons-free zone in the Middle East. And it is more feasible than most assume.

Attacking Iran might set its nuclear program back a few years, but it will most likely encourage Iran to aggressively seek — and probably develop — nuclear weapons. Slowing Iran down has some value, but the costs are high and the risks even greater. Iran would almost certainly retaliate, leading to all-out war at a time when Israel is still at odds with various Arab countries, and its relations with Turkey are tense.

Many hawks who argue for war believe that Iran poses an “existential threat” to Israel. T…
Reactions:
Read more

The Unending Crisis in Baluchistan

- January 15, 2012
Is Pakistan Heading for Disaster in Baluchistan?
Pakistan must end its policy of killings and kidnappings of Baloch people and recognise the importance of the region
Akbar Ahmed, Aljazeera.com

Washington, DC - The behaviour of the powerful elite of Islamabad reminds me of the captain and crew of the RMS Titanic sailing into the night, heading straight towards an iceberg. The civilian, military and judicial authorities are locked up in a tussle coloured by political positions and personal egos. And there is a dangerous disconnect between Islamabad and the enormous problems that loom on the Pakistani horizon.

Law and order appears to have collapsed in many parts of the country. In the north-east, the former Frontier Province, there are daily killings as suicide bombers and the army continuously fight each other. Unemployment is widespread and inflation is sky-high. And there is still a desperate shortage of electricity and gas in much of the country.

But perhaps none of these problems is …
Reactions:
Read more

English Vs. Urdu in Pakistan

- January 10, 2012
Pakistan ruined by language mythEffective teaching of English is the preserve of an elite leaving the rest of the country to linguistic confusion and educational failure
Zubeida Mustafa; guardian.co.uk, Tuesday 10 January 2012
Last year I wrote a book highlighting the crisis in Pakistan's education system caused by the way languages are used and taught. Its publication prompted one critic to remark that I was trying to "backwardise" the children of Pakistan. Another said that language was not the problem; it was what we taught that needed to be addressed.

These were typical responses from highly educated, fluent English speakers. They have glorified the English language in Pakistan to the extent that all logic has been put aside. But they wield great influence over public opinion and have even persuaded policymakers that the country's education system can be fixed by hiring teachers competent in English. Such teachers are hired by exclusive private schools, which are …
Reactions:
Read more

Negotiations with Taliban - Myth and Reality

The Taliban have reportedly agreed to open a representative office in Qatar. What is unclear is who are these ‘Taliban’. There is deafening silence in Pakistan, which should have been bestir with excitement that a defining moment has been reached in the Afghan endgame. The silence needs to be interpreted.

But given the tenor of the media briefings by the spokesman of the Pakistani military in the last few days, it doesn’t seem that Pakistan is part of this Qatar show, although ISI chief Shuja Pasha did pay a quiet visit to Doha last week.

Nor is it likely that the Iranians are in the loop. The Iranian army chief Gen. Ataollah Salehi has just warned the US Fifth fleet not to its depute aircraft carrier to the Persian Gulf again. “We advise and insist that this warship not return to its former base in the Persian Gulf.” (USS John C. Stennis, one of America’s biggest warships, is apparently cruising in …
Reactions:
Read more
More posts