Showing posts from June, 2011
Show all

Islam and the West - "Religious Variations are Wonderful"


In late 2010, a debate over a proposed Islamic community center in lower Manhattan left many people angry and confused. Some critics erroneously tagged the community center the "Ground Zero mosque," and to them, it became an intolerable insult to families of 9/11 victims and the United States.

Imam Feisal Abdul Rauf, the spiritual leader and public face of the center at the time, was at the heart of the 2010 controversy. He tells NPR's Neal Conan that the center was never envisioned as a mosque. Instead, Rauf says, it was "intended all along to be a community center, just like the YMCA, opened to membership of people of all faith communities ... There was a group of people who really didn't care about the facts, didn't care about the truth, and just insisted on their narrative and used it to whip up a lot of negative emotion."

Highly recommended book - Aboard the Democracy Train By Nafisa Hoodbhoy 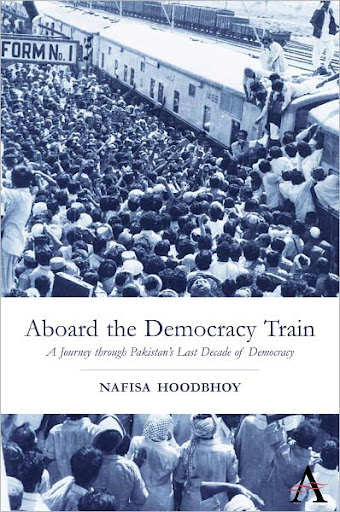 Pakistan through a journalist’s lens
Reviewed by Zubeida Mustafa, Dawn, June 26, 2011
Aboard the Democracy Train: A Journey through Pakistan’s Last Decade of Democracy
By Nafisa Hoodbhoy, Anthem Press, London

Aboard the Democracy Train — a title borrowed from Benazir Bhutto’s campaign by train for the 1988 election — is an account of politics in Pakistan through the experiences of a female reporter, Nafisa Hoodbhoy, working in a predominantly male environment. As a Dawn staffer from 1984 to 2000, she had access to people and places which gave her a ringside view of politics in Pakistan. It goes to her credit that she put her knowledge to good use. What has emerged is a remarkably readable and anecdotal account of events in Pakistan.

For the author’s contemporaries, the book is a journey down memory lane. By skilfully weaving in the story of her own life in journalism — the society she grew up in, her westernised upbringing in an elite and privileged family, her English medium school educ…
Post a Comment
Read more 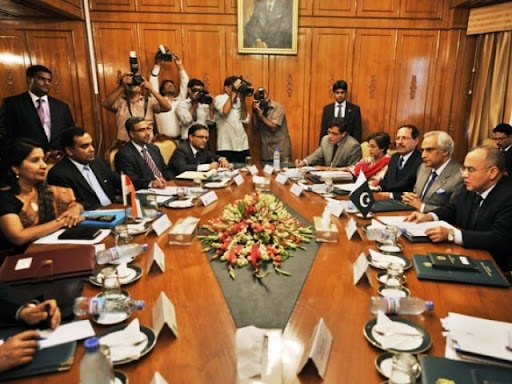 Moving towards a dream... slowly
Basharat Peer, The News, June 22, 2011 On May 12, Indian Prime Minister Manmohan Singh travelled to Kabul for the first time since 2005. There, he announced $500 million in Indian aid, raising India’s total contribution to $2 billion for developmental projects for Afghanistan and increasing cooperation on security issues between the two governments. Singh’s pronouncements in Kabul were followed with great attention in Pakistan.

Asked whether India would mount a covert action similar to the United States operation to kill Osama bin Laden if it had credible evidence of fugitives wanted by India in Pakistan, Singh downplayed such a possibility: “Experience in the past has been rather frustrating and disappointing. One cannot lose hope. Let me say one thing: ...India is not like the United States.” 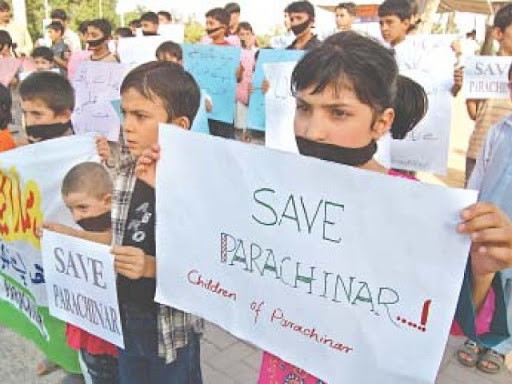 A community under siege in tribal Pakistan

Parachinar, in Pakistan's tribal north west, remains under siege. The only road connecting this district bordering Afghanistan to the rest of Pakistan has been blocked by Taliban fighters since 2007.
The blockade was briefly lifted in March, or so the Pakistani government proudly announced. The road was open again and travellers would be protected, they said. Owais, a 25-year-old recent graduate of engineering, was one of the few who took the risk and decided to visit his family.

On March 25, his Toyota Hiace and two other vans were stopped on the Thal-Parachinar road by Taliban fighters. Owais and 44 others were kidnapped.

The Taliban freed the women and children, but killed seven - some claim ten - of the abducted passengers. A further 30 men remained in captivity for close to three months…
Post a Comment
Read more

The Future of Afghanistan - And America

President Obama arranged for the television networks to break from local programing Wednesday so he could announce his decision to withdraw 30,000 troops from Afghanistan by next summer, and transition out of combat there by 2014. But the Americans who tuned in got to watch a different speech altogether.

After dispatching with the particulars–the death of bin Laden, the trouble with Pakistan, the numbers in Afghanistan–Obama turned to the battle in the American heartland, the one that has alarmed its citizens for years without reprieve, the battle against creeping economic despair and stagnation, a feeling that the country, its economy, its workforce, its homes have all seen their best days.

“America,” Obama said, “it is time to focus on nation building here at home.”

Pakistan Army and Hizb ul Tahrir - Arrest of a Brigadier

June 22, 2011
Arrest of Pakistani officer revives fears of extremism within military,   By Tim Lister and Aliza Kassim, CNN, June 22, 2011
(CNN) -- Brigadier General Ali Khan was close to retiring at the end of a distinguished career in the Pakistani Army when he was detained early in May -- and accused of links with an outlawed Islamist group. His arrest, which became public Tuesday, shocked fellow officers at army headquarters and again raises the specter that senior ranks of the Pakistani officer corps may be infiltrated by Islamist militants. Brigadier Khan is the most senior officer to face such allegations since 1995, according to a CNN analysis of previous cases. Army spokesman Major General Athar Abbas said Khan was believed linked to Hizb ut-Tahrir (Party of Liberation). He said efforts were underway to arrest members of the group who had been in contact with Khan.
Post a Comment
Read more

This column is about NATGRID (National Intelligence Grid), which is supposed to improve our counter-terrorist capability. But first let me tell you a story. Three years after my retirement, my friend introduced me to a Mumbai bulk garment exporter who had a problem. Once a leading figure in this trade, his business had collapsed by 1990. His problem started soon after making a confidential declaration under the 1997 Voluntary Disclosure Scheme. He started receiving extortion threats from the "underworld", quoting the exact figures he had revealed to the income-tax authorities. I then referred him to the Mumbai police commissioner.

Murshid, Marwa Na Daina by Mohammad Hanif - A Must Read

What is the last thing you say to your best general when ordering him to conduct a do-or-die mission? A prayer maybe, if you are religiously inclined. A short lecture underlining the importance of the mission if you want to keep it businesslike. Or maybe you just say ‘good luck,’ accompanied by a clicking of the heels and a final salute.

On the night of July 5, 1977 as Operation Fair Play, meant to topple Z.A. Bhutto’s elected government, was about to commence, the then army chief General Zia-ul-Haq took his right-hand man and the Corps Commander of 10th Corps, Lt General Faiz Ali Chishti aside and whispered to him: “Murshid, marwa na daina.” (Murshid, don’t get us killed.)

Zia was indulging in two of his favourite pastimes: spreading paranoia among those around him, and cosying up to the junior officer he needed to do his dirty work. General Zia had a talent for that; he could make his juniors feel as if they were indispensa…
1 comment
Read more

Hassan Abbas on Reform in Pakistan
Interview by, Sophie Roell
The Browser, Jun 9, 2011

Excerpts
Tell me about the book by Muhammad Iqbal, The Reconstruction of Religious Thought in Islam.

This is an old book, from 1930, before Pakistan’s creation. It’s based on lectures given by Dr Iqbal, the Indian poet-philosopher who initially came up with the idea of Pakistan. He is also officially designated as the country’s “national poet”. You can buy this book everywhere in Pakistan – not only major bookstores, but small ones as well. Iqbal emphasises the concept of ijtihad. This is an Arabic word, which implies creative interpretation of Islamic law through rational or logical reasoning. He is making the case that religious belief, especially when its ideas are applied to politics, should be rational. He was also a supporter of representative democracy. Today his ideas are very relevant, especially when we have to counter the dogmatism of religious forces in the political arena, and challenge …
Post a Comment
Read more

The Future of Al-Qaeda

The death of Osama bin Laden on May 2 in Abbottabad, Pakistan is undoubtedly a major setback for al-Qaeda and a significant achievement for the United States and its allies. In recent days, al-Qaeda purportedly has released several statements, including a lengthy two-part video, but its message since bin Laden's killing remains confused. While the first statements released by the group and its affiliates focused on praising bin Laden and vowing new attacks, the most recent video focuses instead on "one-man" ter…
Post a Comment
Read more

Smoke billows above coils of razor wire after an earth-shaking explosion kills one of Afghanistan’s most powerful generals. The next day, a young officer with a neatly trimmed beard accepts a new job during a brief ceremony in the wood-panelled office of a southern governor.
A strongman dies and another rises. The bloody politics of Afghanistan travelled full circle with the death of General Daud Daud in the north and the promotion of Brigadier-General Abdul Razik in the south. The fall of one mirrored the rise of the other, marking the loss of an older generation of warlords and the birth of a new class of often brutal allies to whom NATO intends to start transferring power this summer.

The success of that transition depends on characters who might be too unpleasant to deal with under other circumstances. Having failed to establish a working government in many parts of…
1 comment
Read more

Compared to his budget speech last year, the finance minister’s speech yesterday was empty and disappointing. It was devoid of much content or merit and failed to identify or address any of Pakistan’s numerous pressing problems.

It is difficult to say what more he would have added had he not faced much of the abuse hurled at the government, something which only a full reading of the text will reveal.

Based on what he presented just a day earlier in the form of Pakistan’s Economic Survey for the current financial year, the budget presented by the finance minister yesterday for the fiscal year 2011-12, confirms what many economists have been saying for some time.

There is a huge disconnect between the real problems which afflict Pakistan’s economy and its people, and the government’s response to them. It seems that this government does not have the ability, or perhaps even the desire, to address Pakistan’s key economic problems.

Charlie Rose show on June 1, 2011: Hassan Abbas, author of a new report, "Pakistan 2020: A Vision for Building a Better Future," Pir Zubair Shah of The New York Times and Shuja Nawaz of Atlantic Council discuss questions about Pakistan's security agencies and relations with the U.S.

The Murder of Journalist Saleem Shahzad - Deplorable and Tragic

June 01, 2011
Missing Pakistan journalist Saleem Shahzad found dead near IslamabadShahzad's body was discovered less than two days after he was allegedly abducted by ISI, Pakistan's intelligence service Declan Walsh in Islamabad, The Guardian, 1 June 2011
A prominent Pakistani journalist who investigated links between the military and al-Qaida has been found dead, triggering angry accusations against the powerful Inter-Services Intelligence spy agency.
Saleem Shahzad, Pakistan correspondent for a news service based in Hong Kong, disappeared on his way to a television interview in Islamabad on Sunday evening. On Tuesday ,police said they found his body on a canal bank in Mandi Bahauddin, 80 miles south-east of the capital.

Shahzad's abandoned car was found 25 miles away. Television images of his body showed heavy bruising to his face. Media reports said he had a serious trauma wound to the stomach.