A Story of Hope from Multan College of Arts 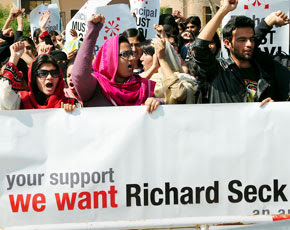 After the longest strike in the history of Bahauddin Zakariya University (BZU), the students of the Multan College of Arts were forced back into the classrooms on Monday, March 16, 2011. They had stood united for 21 days while facing harassment and threats of expulsion by the administration, and threats of physical violence from politically-backed student groups. They continued to stand and peacefully protest after disappointment followed disappointment in meetings with the highest-level officials in the Punjab Government. The core of what they were fighting for was truth, justice and a proper education. In the end, none of their goals were achieved.

It is not without irony that I write a tale that can be construed as another damning story in the long legacy of the horrendous politics of this nation. I, who arrived in Karachi in December of 2006 with sole purpose of celebrating the people, places, and incredible history of land that I had fallen in love with on my four previous trips to Pakistan at the turn of this century.

How can this story be negative for me though, when these students were in fact attempting, through their pure and peaceful actions, to keep me, their Assistant Professor Richard Seck, in their college where I have given all I had give for the last two-and-a-half years in an attempt to fill the many voids in their education. They have seen my sleepless nights, the three miraculous Design Department Thesis Exhibitions, the successes of those who have graduated and have moved on to higher education in Pakistan and abroad, or into the marketplace in a position exactly suited to their passion and skill sets. And how I bashed my head against the wall for six months; seemingly tirelessly marching, again and again, to the Vice Chancellor’s office to get funding for the most basic requirements of the college. They have witnessed how I pushed to get additional help from the Indus Valley School of Art and Architecture, by bringing one of its graduates to set up a much-needed, proper, integrated foundation year programme, and typography courses for the design department. When the administration, who were apparently blind to this effort (or worse yet, not), sent me a text message on February 19, 2011, that my contract would not be renewed, the students, upon hearing this, immediately shut the college down in protest of my dismissal. Their determination was further fueled by an illegal dismissal letter that simply stated that “my services are no longer required”. The students knew very well that there was no legitimate reason for my dismissal and cited that this was simply based on the biased agenda of the administration.

The story of these brave and determined students is the story I want the world hear about Pakistan. The fact that they could hold out as long as they did and get their message to a wider audience is nothing short of a miracle under the crushing pressure that they faced. For me, it is a story of hope for the future of this incredible country. These are the stories that I want to convey about the Pakistan that I love and have come to call my home.

Richard Seck, at the time of writing this blog (March 17), is awaiting the return of BZU Security to deliver the final notice to vacate his University accommodation.