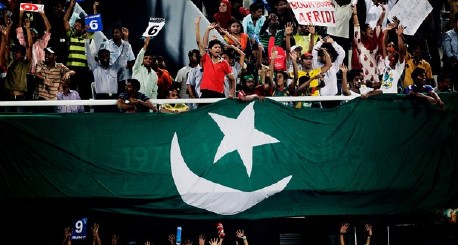 Today, on March 23rd, the Pakistani national cricket team takes the field in the World Cup Cricket quarterfinals. The attention of the nation is focused on the men in green and their determined gazes at the next round. This national team is a motley crew – young and old, new and experienced, hailing from various parts of the nation-state.

It may have been a bit slow coming but cricket fever is now everywhere. This enthusiasm is a fitting scene and a fitting scenario for the team. After all, the cricket team has epitomised Pakistani nationalism since the heady days of General Zia-ul-Haq’s “cricket diplomacy” and the tours with India under Imran Khan. Some say that nothing really changed between India and Pakistan as a result of that “diplomacy” but it did – Imran Khan and his team became the purest, brightest national symbol the nation ever had. When they lifted the World Cup trophy in 1992, it was the triumph of nationalism itself.

Ask any Pakistani who witnessed that event live. Where the cricket team is the nation embodied, March 23rd is Pakistan Day – a day to celebrate the Lahore Resolution of 1940 which became the very basis of an independent Pakistan. This is the day represented by the Minar-e Pakistan in Lahore. This is the day that the national spirit invokes furious displays of military hardware and patriotic speeches. On this particular March 23rd, the symbolic and metonymic will finally meet and we will all bask in the spirit of Pakistan.

Except we will all be – all of us – in Dhaka, Bangladesh, where the cricket match is being held. Dhaka, that intimate now turned stranger, as Faiz wrote in 1974.

In that soil lies the writer of that Lahore Resolution of 1940 – A K Fazlul Huq (d. 1962). There lies also Khwaja Nizamuddin (d. 1964) who was the second Governor General and the second Prime Minister of Pakistan. There, next to him, lies H S Suhrawardy (d. 1963) who was the fifth Prime Minister of Pakistan. These men were the architects of the Lahore Resolution though their visions differed on significant points with that of Quaid-e Azam Muhammad Ali Jinnah. They urged for a Pakistan that was inclusive, diverse and which was the sum of all its parts. Their graves in Dhaka signal the deepest silence in Pakistan’s history.

A silence that extends all over Dhaka and the bloody violence it suffered in 1971. It became a city soaked in the blood of its own inhabitants, as the, then, West Pakistani army purged it of its intellectuals, its leaders, its poets, its dreamers, its students. After the separation of East Pakistan, the creation of Bangladesh, the Hamoodur Rahman Commission Report valiantly tried its best to document that bloody Dhaka but it fell short and, in any case, the report itself lays forgotten by patriotic Pakistanis.

In Pakistan, there is no remembrance of 1971. Sakoot-e Dhaka is not part of common vocabulary. An examination of the 6th, 7th, 8th, 9-10th, and 12th grade Pakistan Studies/Social Studies textbooks from Punjab Texbook Board reveals a glaring lack of any reference to 1971 or even to our collective lives prior to 1971; of that mutual struggle for independence that bonded Muslims across the subcontinent. The questions in the M.A. History examinations never address 1971. Entire generations born after 1971 have no political or cultural memory that their nation wasn’t partitioned once, but twice. They have no awareness that the promises of the Lahore Resolution – and not just the one clause of “independent states” – were wasted by the politicians who came after. But the silences run to even greater depths – these generations cannot conceive that the federal state has a history of denying states their due, their rights, their seat at the table. They do no realise that the complaints of Swat, of Khyber-Pakhtunkhwa, of Balochistan for justice, for recognition are echoes of the cries of Dhaka.