Victory for the People of Egypt: Hosni Mubarak Steps Down 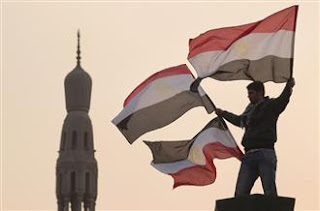 Hosni Mubarak resigns as president
Egyptian president stands down and hands over power to the Supreme Council for the Armed Forces.
Aljazeera, February 10, 2011

Hosni Mubarak, the Egyptian president, has resigned from his post, handing over power to the armed forces.

Omar Suleiman, the vice-president, announced in a televised address that the president was "waiving" his office, and had handed over authority to the Supreme Council of the Armed Forces.

Suleiman's short statement was received with a roar of approval and by celebratory chanting and flag-waving from a crowd of hundreds of thousands in Cairo's Tahrir Square, as well by pro-democracy campaigners who attended protests across the country on Friday.

The crowd in Tahrir chanted "We have brought down the regime", while many were seen crying, cheering and embracing one another.

Mohamed ElBaradei, an opposition leader, hailed the moment as being the "greatest day of my life", in comments to the Associated Press news agency.

"The country has been liberated after decades of repression,'' he said.

"Tonight, after all of these weeks of frustration, of violence, of intimidation ... today the people of Egypt undoubtedly [feel they] have been heard, not only by the president, but by people all around the world," our correspondent at Tahrir Square reported, following the announcement.

"The sense of euphoria is simply indescribable," our correspondent at Mubarak's Heliopolis presidential palace, where at least ten thousand pro-democracy activists had gathered, said.