Pakistani writers in an age of extremism 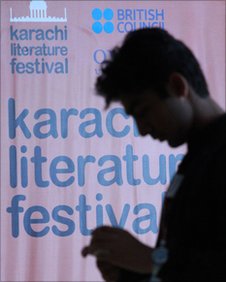 Pakistani writers in an age of extremism
By Nosheen Abbas, BBC, 13 February, 2011
Karachi: When journalists and political activists prominently feature in a literary festival, you know that freedom of speech is a major issue.

"We're like the villain of a horror film," said Pakistani writer Mohsin Hamid about the international view of Pakistan.

This statement set the stage for an alternative narrative in Pakistan during the recent Karachi literary festival. The event was attended by some of the best-known writers, activists and artists in the country.

But what was clear throughout all the crowded, passionate sessions was that these voices are at risk of being drowned out by extremism.

On a hot and tropical day, the halls of a coastal Karachi hotel were filled with young and old, some wading slowly through the crowds on crutches. The most popular sessions were those that discussed the identity of the country and the ever-present question of Pakistan's future.

Madiha Gauhar of the Ajoka theatre organisation talked about her play Burqavanza, which was banned by the government in 2007. She said the play was about "love in the time of jihad".

Love can be a dangerous thing. According to the director of Pakistan's Human Rights Commission, there were 556 "honour killings" in 2010 - and the number is rising.

Ms Gauhar said "love is prevented by so many forces… and it happens every day over here, no matter what class you belong to".

Mr THomas said…
Noir Nation is looking for stories by Pakistani authors, and also non-fiction pieces/articles on topics such as:

http://www.facebook.com/noirnation Give us a thumbs up if you will.