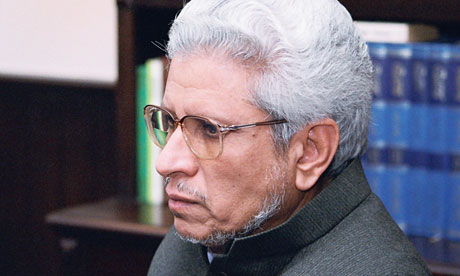 A prominent Islamic scholar has launched a blistering attack on Pakistan's blasphemy laws, warning that failure to repeal them will only strengthen religious extremists and their violent followers.


"The blasphemy laws have no justification in Islam. These ulema [council of clerics] are just telling lies to the people," said Javed Ahmad Ghamidi, a reformist scholar and popular television preacher.

"But they have become stronger, because they have street power behind them, and the liberal forces are weak and divided. If it continues like this it could result in the destruction of Pakistan."

Ghamidi, 59, is the only religious scholar to publicly oppose the blasphemy laws since the assassination of the Punjab governor, Salmaan Taseer, on 4 January. He speaks out at considerable personal risk.

Ghamidi spoke to the Guardian from Malaysia, where he fled with his wife and daughters last year after police foiled a plot to bomb their Lahore home. "It became impossible to live there," he said.

Their fears were well founded: within months Taliban gunmen assassinated Dr Farooq Khan, a Ghamidi ally also famous for speaking out, at his clinic in the north-western city of Mardan.

The scholar's troubles highlight the shrinking space for debate in Pakistan, where Taseer's death has emboldened the religious right, prompting mass street rallies in favour of his killer, Mumtaz Qadri.

Muhammad Saeed Babar said…
If he is so dissatisfied with the law, he should move the court rather than blaming others. Salman Taseer took the matter in his own hand when that matter was sub-judice and as a representative of the Govt., he was not supposed to take sides but let the court decide the matters. His murder can be seen as a social control when state has failed to performed its functions properly and according to the wishes of people - lets be democratic with it also.
1/22/2011 12:06 AM

If one were to keep the blasphemy laws as they are, the party that brought about the claim that Aasia Bibi was guilty of committing blasphemy could themselves be held as blaspheming: http://www.dailytimes.com.pk/default.asp?page=2011\01\22\story_22-1-2011_pg3_5