The U.S - Pakistan Relations after 9/11 - In the light of newly declassified US documents 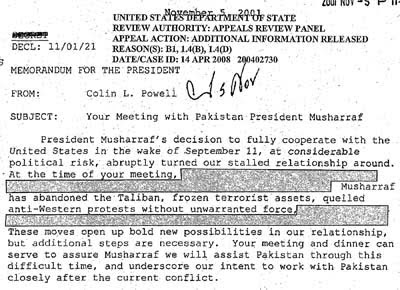 U.S. had "Absolutely No Inclination" to Negotiate with Taliban September 2001; Pakistan Disagreed, Claimed "Real Victory" Only Through Talks; Washington's Immediate 9/11 Demands to Islamabad

Washington, D.C., September 13, 2010 - Pakistani tribal areas where Osama bin Laden found refuge were momentarily open to the Pakistani Army when "the tribes were overawed by U.S. firepower" after 9/11, but quickly again became "no-go areas" where the Taliban could reorganize and plan their resurgence in Afghanistan, according to previously secret U.S. documents obtained through the Freedom of Information Act by the National Security Archive and posted today at http://www.nsarchive.org/

The declassified documents describe the consequences of these events. According to U.S. Ambassador to Afghanistan Ronald E. Neumann, the 2005 Taliban resurgence in Afghanistan was a direct product of the “four years that the Taliban has had to reorganize and think about their approach in a sanctuary beyond the reach of either government." This had exponentially increased casualties as the Taliban adopted insurgency tactics successful in Iraq, including suicide bombings and the use of IEDs. Ambassador Neumann warned Washington that if the sanctuary in Pakistan were not addressed it would "lead to the re-emergence of the same strategic threat to the United States that prompted our OEF [Operation Enduring Freedom] intervention" in 2001.

As current U.S. strategy increasingly pursues policies to reconcile or “flip” the Taliban, the document collection released today reveals Washington’s refusal to negotiate with Taliban leadership directly after 9/11. On September 13, 2001, U.S. Ambassador Wendy Chamberlin “bluntly” told Pakistani President Musharraf that there was “absolutely no inclination in Washington to enter into a dialogue with the Taliban. The time for dialog was finished as of September 11.” Pakistan, as the Taliban’s primary sponsor, disagreed. Pakistani Intelligence (ISI) Chief Mahmoud told the ambassador “not to act in anger. Real victory will come in negotiations… If the Taliban are eliminated... Afghanistan will revert to warlordism.”

Regarding the apprehension of Osama bin Laden, the ISI Chief said it was "better for the Afghans to do it. We could avoid the fallout.” Mahmoud traveled to Afghanistan twice, on September 17, aboard an American plane, and again on September 24, 2001 to discuss the seriousness of the situation with Taliban leader Mullah Omar. Ambassador Chamberlin said that the negotiations were pointless since Mullah Omar “had so far refused to meet even one U.S. demand.” Chamberlin told Mahmoud his meetings with Omar were fine, but they “could not delay military planning.”