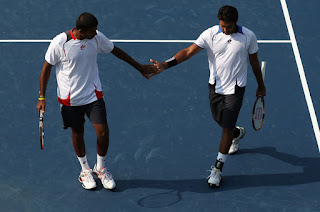 Written by Rafaya Sufi on September 7, 2010 for Asia Society

Sixty-three years since gaining independence in 1947, India and Pakistan have succumbed to three wars, numerous arguments, and several border clashes breaking the countries into ideological

opposites. But none of that has stopped tennis stars Aisam-ul-haq Qureshi of Pakistan and Rohan Bopanna of India from achieving high levels of success in the US Open, currently being held in New York.

Qureshi, a 30-year-old Muslim hailing from Pakistan's cultural capital Lahore, has been playing professionally since 1998. He is the first Muslim player to enter the mixed and men's doubles of the US Open in Flushing Meadows, New York. However, the remarkable thing about Qureshi is not his nationality or religion, but his unlikely partnership with Bopanna.


The doubles pair have been using their friendship, on and off the court, as a call for the resolution of the conflict between their two countries. Their recent campaign, "Stop War, Start Tennis," which was first introduced in Wimbledon, has created a stir amongst Indians and Pakistanis who want to see more peaceful times between the two countries.

Between the duo, the complicated web of theological, military, and intellectual differences place as much importance on perception as it does performance, making their pairing controversial to begin with, according to The Star-Ledger.