New Report: Prospects for Security and Political Reconciliation in Afghanistan 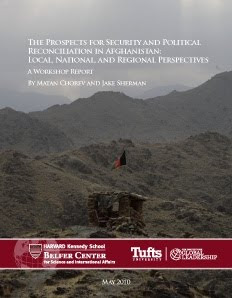 The Harvard Kennedy School’s Belfer Center for Science and International Affairs and Tufts University’s Institute for Global Leadership are pleased to publish “Prospects for Security and Political Reconciliation in Afghanistan: Local, National, and Regional Dimensions.”

The report, written by workshop co-conveners Matan Chorev and Jake Sherman, and based on two days of intense discussions hosted by the Institute for Global Leadership at Tufts University, summarizes the predom­inant views of a select group of Afghan politicians and former military officials, Pakistani journal­ists and scholars, current and former United Nations officials, diplomats, humanitarian workers, and representatives from the U.S. military on the opportunities for, and obstacles to, security and political reconciliation in Afghanistan.

The report concludes that “the near-term prospects for security and political reconciliation in Afghanistan are bleak. Nonetheless, the United States, its coalition partners, and neighboring states can still assist in shaping sustainable, Afghan-led stabilization.”

“The report offers guideposts to policymakers based on the enormous experience of the participants and eight years of painful lessons learned to guide policy,” says Matan Chorev. “It encourages policymakers to move beyond material incentives in the design of reintegration and reconciliation programs and to give primary focus to the political drivers of the conflict at both the local and national levels. Further, it highlights the overwhelming effect of U.S.-led coalition military operations and the mendicant aid economy on key stakeholders’ incentives and argues that policymakers should take special care to ensure that programs designed to support near-term objectives do not undermine the long-term prospects for the stability of Afghanistan.”