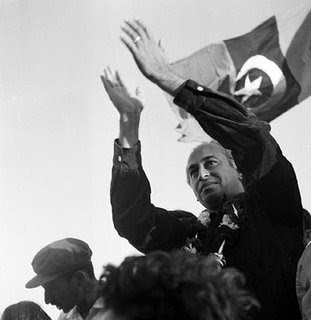 Biography with a twist By Anjum Niaz

Today, 31-years ago, Zulfikar Ali Bhutto was hanged. It reminds me of an email I received on another Sunday morning. It was from ‘Benazir’s brother.’ He had just finished reading my column on Benazir Bhutto’s second death anniversary. “ZAB was my best friend. I was to write his biography,” wrote the e-mailer. “His beloved daughter Benazir gave her life for the restoration of democracy. I was supposed to be killed with her when she arrived in Karachi. In our last meeting in New York we had agreed to adopt each other as sister and brother. But that is another story… I know who killed her.”

The next day we met at an Indian restaurant (in the US). It was an uncanny coincidence that he happened to be in the area I was in. Seated around were American diners blithely unaware of a land called Pakistan and the mysteries it holds. I found it even more surreal to hear the Bhutto ghost being resurrected by this stranger who dropped out of the blue as I sat thousands of miles away from Pakistan.

Dr Thomas B Manton was the mystery man. He was Zulfikar Ali Bhutto’s “best American friend.” In the fall of 1966 a dear friend of his in New York, the Dawn Correspondent at the United Nations, set up a meeting with Bhutto. The four-hour meeting was a “wonderful tour de force of what really happened during the 1965 war between India and Pakistan.” In the 95-page transcript of his interview which the US government wanted to see, “but I never gave it to them,” ZAB revealed that the war would not have ended if UN Secretary-General U Thant (whose biographer Tom was) had not intervened. “Bhutto was not the reckless young foreign minister often portrayed by the press. He was very realistic and visionary as to what the available options for Pakistan were.”