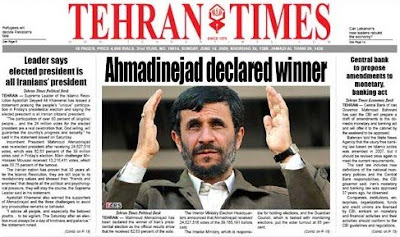 TEHRAN — She was in tears like many women on the streets of Iran’s battered capital. “Throw away your pen and paper and come to our aid,” she said, pointing to my notebook. “There is no freedom here.”

And she was gone, away through the milling crowds near the locked-down Interior Ministry spewing its pick-ups full of black-clad riot police. The “green wave” of Iran’s pre-election euphoria had turned black.

Down the street outside the ghostly campaign headquarters of the defeated reformist candidate, Mir Hussein Moussavi, the baton-wielding police came in whining phalanxes, two to a motorbike, scattering people, beating them.

“Disperse or we’ll do other things and then you’ll really know.” The voice, from a police megaphone, was steady in its menace. “You, over there, in a white hat, I’m talking to you.”

Anger hung in the air, a sullen pall enveloping the city, denser than its smog, bitter as smashed hope.

I say “defeated.” But everything I have seen suggests Moussavi, now rumored to be under house arrest, was cheated, the Iranian people defrauded, in what Moussavi called an act of official “wizardry.”

Within two hours of the closing of the polls, contrary to prior practice and electoral rules, the Interior Ministry, through the state news agency, announced a landslide victory for President Mahmoud Ahmadinejad, whose fantastical take on the world and world history appears to have added another fantastical episode.

Throughout the country, across regions of vast social and ethnic disparity, including Azeri areas that had indicated strong support for Moussavi (himself an Azeri), Ahmadinejad’s margin scarcely wavered, ending at an official 62.63 percent. That’s 24.5 million votes, a breathtaking 8 million more than he got four years ago.

No tally I’ve encountered of Ahmadinejad’s bedrock support among the rural and urban poor, religious conservatives and revolutionary ideologues gets within 6 million votes of that number.

Ahmadinejad won in other candidates’ hometowns, including Moussavi’s. He won in every major city except Tehran. He won very big, against the backdrop of an economic slump.

He won as the Interior Ministry was sealed, opposition Web sites were shut down, text messages were cut off, cell phones were interrupted, Internet access was impeded, dozens of opposition figures were arrested, universities were closed and a massive show of force was orchestrated to ram home the result to an incredulous public.

Overnight, a whole movement and mood were vaporized, to the point that they appeared a hallucination.

The crowds called it a “coup d’état.” They shouted “Marg Bar Dictator” — “Death to the dictator.” Eyes smoldered.

I’ve argued for engagement with Iran and I still believe in it, although, in the name of the millions defrauded, President Obama’s outreach must now await a decent interval.

I’ve also argued that, although repressive, the Islamic Republic offers significant margins of freedom by regional standards. I erred in underestimating the brutality and cynicism of a regime that understands the uses of ruthlessness.

“Here is my country,” a young woman said to me, voice breaking. “This is a coup. I could have worked in Europe but I came back for my people.” And she, too, sobbed.

“Don’t cry, be brave,” a man admonished her.

He was from the Interior Ministry. He showed his ID card. He said he’d worked there 30 years. He said he hadn’t been allowed in; nor had most other employees. He said the votes never got counted. He said numbers just got affixed to each candidate.

He said he’d demanded of the police why “victory” required such oppression. He said he’d fought in the 1980-88 Iraq war, his brother was a martyr, and now his youth seemed wasted and the nation’s sacrifice in vain.

Quoting Ferdowsi, the epic poet, he said, “If there is no Iran, let me be not.” Poets are the refuge of every wounded nation — just ask the Poles — and nowhere more so than here in this hour.

Iran exists still, of course, but today it is a dislocated place. Angry divisions have been exposed, between founding fathers of the revolution — Ayatollah Ali Khamenei, the supreme leader, and Ali Akbar Hashemi Rafsanjani, the former president — and between the regime and the people.

Khamenei, under pressure from Rafsanjani, appeared ready to let the election unfold, but he reversed course, under pressure, or perhaps even diktat, from the Revolutionary Guards and other powerful constituencies.

A harsh clampdown is underway. It’s unclear how far, and for how long, Iranians can resist.

On Vali Asr, the handsome avenue that was festive until the vote, crowds swarmed as night fell, confronting riot police and tear gas. “Moussavi, Moussavi. Give us back our votes,” they chanted.

Majir Mirpour grabbed me. A purple bruise disfigured his arm. He raised his shirt to show a red wound across his back. “They beat me like a pig,” he said, breathless. “They beat me as I tried to help a woman in tears. I don’t care about the physical pain. It’s the pain in my heart that hurts.”

He looked at me and the rage in his eyes made me want to toss away my notebook.