Beat extremists you can, says Obama: Exclusive Interview to Dawn 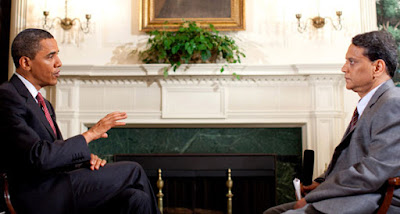 WASHINGTON: US President Barack Obama, in an exclusive interview to Dawn, has said that he believes the Pakistani state is strong enough to win the military offensive against the extremists.

In this first-ever one-on-one interview by any US president to the Pakistani media, Mr Obama assured the Pakistani nation that he has no desire to seize Pakistan’s nuclear weapons or send US troops inside the country.

The US president also emphasised the need for resuming the dialogue process between India and Pakistan, which was stalled after the Mumbai terrorist attacks in November last year.

The interview covered a wide-range of subjects — from the controversy involving the Iranian presidential election to Mr Obama’s speech in Cairo earlier this month in which he called for a new beginning between the Muslim and the Western worlds.

The venue, the White House diplomatic room with murals of early settlers, brought out the importance of Mr Obama’s historic victory in last year’s general election.

Close to the murals — under the watchful eyes of George Washington — sat a man who overcame gigantic hurdles to become America’s first non-White president.

Here was a man tasked with finding a graceful end to two unpopular wars — in Iraq and Afghanistan — and to steer America, and the rest of the world, out of an unprecedented economic crisis.

Yet, when he strolled into this oval-shaped room, Mr Obama seemed completely at ease with himself. Tall and slim, the 47-year-old US president had the youngish looks of a man who works out daily.

He walked straight towards the camera, greeting everyone, shook hands, occupied the chair reserved for him, and started talking about how he had a special affection for Pakistan and its people.

Asked to comment on Ayatollah Khamenei’s statement that the US was interfering in Iran’s internal affairs, Mr Obama said what’s happening in Iran was remarkable. ‘To see hundreds of thousands of people in peaceful protest against an election that obviously raised a lot of doubts tells us that this is an issue that the Iranian people care deeply about.’

The US and the West, he said, had been very clear that this was not an issue between the West and Iran; this was an issue about the Iranian people seeking justice and wanting to make sure that their voices were heard.

‘And it’s unfortunate that there are some inside Iran and inside that government that want to use the West and the United States as an excuse,’ he said.

‘We respect Iran’s sovereignty, but we also are witnessing peaceful demonstrations, people expressing themselves, and I stand for that universal principle that people should have a voice in their own lives and their own destiny. And I hope that the international community recognises that we need to stand behind peaceful protests and be opposed to violence or repression.’

Mr Obama said that since there were no international observers in Iran, he could not say if the elections were fair or unfair. ‘But beyond the election, what’s clear is that the Iranian people are wanting to express themselves. And it is critical, as they seek justice and they seek an opportunity to express themselves, that that’s respected and not met with violence.’

‘Your speech in Cairo indeed was a speech that created a lot of stir, both in the US and in the Muslim world. Was it the beginning of something bigger to come, or was it just a one-off thing? He was asked.

‘No, I think that this is going to be a sustained process. As I said in Cairo, one speech is not going to transform policies and relationships throughout the Middle East or throughout the world,’ Mr Obama responded.

‘But what I wanted to do was to describe very clearly that the United States not only respects Muslim communities around the world but that there’s an opportunity for I think a new day, where there’s mutual understanding, mutual tolerance; where the United States is seen as somebody who stands with people in their daily aspirations for an education for their children, for good jobs, for economic development,’ he said.

‘And just as the United States at times has, I think, not fully understood what’s happening in Muslim communities, sometimes there have been countries that haven’t understood the rich history of Muslims in America,’ he added.