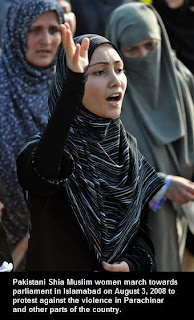 Sarwan Ali-an honest man, is a retired Lance Naik from the village Malana in the outskirt of Parachinar and has been living with his wife in a single room. Not any more. Now, he is fighting for his life in Agency HQ Hospital, Parachinar, from a gunshot wound.

Wounds inflicted from bombs, snipers, splinters and guns have become part of daily life in Kurrum agency mostly linked to sectarian strife. But his wound is different. He was not shot by the opposing group for his affiliation to any sect. His is a self inflicted wound. Reason? Before the sectarian conflict, he would go to Parachinar and work on ‘Dhiari’ (daily wages) to earn enough to sustain himself and his wife. After the escalation in war, situation has changed dramatically. In a short span, the death toll has reached hundreds and the injured thousands. The prices of daily commodities have rocketed sky-high as the only road linking Parachinar with mainland Pakistan remains closed. This has paralysed the life in Parachinar, closing the markets and stopping the construction work. As a consequence, the poor are suffering the most. The days of ‘Dhiari’ are over and they, like Sarwan Ali, are jobless and with no income.

Many mornings, he went to the town expecting to earn a few rupees and every evening he came back empty handed with shattered hopes. Many nights he and his wife went to bed without proper food with bellyful of boiled leaves from the nearby ShahTut tree. He was too proud to beg and too honest to steel. He sold all their possessions, except for his rifle. In the Pukhtun culture, rifle is considered to be a man’s honour; he couldn’t sell his honour. He returned home one evening feeling low and disheartened after another fruitless day and found his grief stricken wife shivering like a leaf. He knew it was Malaria as he saw her in that state before. But still, he put his trembling hand on her forehead; she was burning hot. He also knew she needed medicine to bring the temperature down and to treat the Malaria but this time, unlike the previous time; he didn’t have money to buy the needed medicine. The feeling of desperation hit him hard and the sense of worthlessness stabbed him deep. He couldn’t bear to see the pain on her pale face. He knew she was not only sick but also weak from lack of food. Filled with despondency, he moved to one corner, picked up his gun, loaded it and turned around to face her. Tears were rolling down her face. She knew what he was about to do. “You’re an honourable man Sarwan Ali. Do what you have to do.”

She closed her eyes waiting for the end. He pointed the gun at her but could not bring himself to shoot her. He started crying like a child and for a long time, the two caring souls broke the silence with their agonising sobs. Then slowly, he eased the pressure on the trigger and started walking towards the door. He decided to sell his honour, his gun, in Parachinar to buy medicine for his dear wife. He went to a chemist shop and offered to sell his gun and get medicine out of the price. He was told that there was no medicine because none was coming through the blocked roads from Peshawar. Sarwan pleaded with him and told him about his wife’s condition. The man felt sorry for him and handed him over two Paracetamols.

Back in the room, he gave the tablets to his wife and after a while she stopped shivering and went to sleep. He watched her sleep for a long time, then got up slowly, performed Wazu as if he was preparing for prayer; picked up his gun and without a second thought shot himself. The bullet passed through his chest.

Things changed when Shah was deposed in Iran, when Zia took over in Pakistan, when Afghanistan was invaded by the Soviets, when America supported fanatic Sunni Arabs against Soviets, and when it helped Sunni Pukhtuns against Iran. Things changed radically. What people didn’t realise was that America was using Muslim religious sentiments for its own gains. It poured money into the pockets of Afghan Warlords with the help of general Zia and turned American war into ‘Charlie Wilson’s War’ with tremendous consequences to Pakistan. It took advantage of Zia’s sectarian leanings and put Pakistan on the road to political and religious vulnerability. It was then, when Parachinar was caught in the middle of sectarian strife.

Iranian clergy started supporting the Shias in Parachinar through prominent local Syeds, and the Saudi Wahabis pumped money to the local Sunni Mullahs. Sunnis fought Afghan war to please Saudis and Shias safeguarded Iranian interests. Soviets were defeated in Afghanistan; American won the ‘Charlie Wilson’s War’ and left the spoils in the hands of fanatics. The spill over was bound to effect Parachinar. And it did in a big way.

The beautiful town has never since returned to its previous grace. The time rolled on. The strong corporations in America required an enemy to replace the dismembered Soviets. They found one in the garb of ‘terrorism’ creeping out of Afghanistan. It was moulded in the same outfit as their Jihadi friends in the not so distant past. Now, they needed the change of guards in Afghanistan to target it. They got lucky; the history favoured them twice; once when Musharaf sacked a democratic government in Pakistan; again, when the Towers were brought down by the terrorists. The White House didn’t need much persuasion to seek help from ‘moderate’ Musharaf who made a U-turn in Afghan policy. With change of policy the enemies changed. Now, the Americans were not fighting the communists; they were fighting the terrorists who happened to be Muslims; and Musharaf was not fighting the infidels, he was fighting the same Muslims.

In this way, the moderate Musharaf surpassed those barriers which even zealous Zia dared to tread, exposing Pakistan to massive internal turmoil. Today, Parachinar is burning in a fire lit by fanatic Zia and spread by moderate Musharaf; a fire which is different from the one seen in rest of the tribal area. It is not linked to sentiments against Pakistan army or even America. It is based on emotions against Taliban. Majority in upper Kurrum are Shia and they despise Taliban. Taliban in return, reciprocate their sentiments by sending decapitated bodies of Shias captured during their journeys to Peshawar. The Internet is full of grotesque footages. The Shia-dominated upper Kurrum is sealed by the surrounding Sunni-belt having a strong influence of Taliban. In the middle of it, Parachinar is in virtual siege with no food items, no daily commodities and no medicines.

In desperation, the Shias are turning to Afghan government for help after seeing apparent apathy from Pakistan. This is a bizarre situation, the like of which was once historically seen in early 20th century, when a Shia Turi tribal Chief, Noor Khan (alias Dur Khan) sought British help when he found Shias under siege in identical circumstance. Today they are asking Afghan government to help them against the Taliban. In the middle of this bizarre turn around, the poor people of Parachinar from both sects are slaughtered like animals in sectarian hate and others like Sarwan Ali are killing themselves for reasons other than that hate. This is Parachinar burning in a fire not lit by the locals but by those whose political and religious interests lay outside Pakistan.