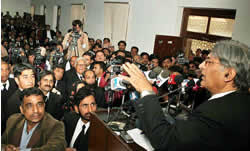 Aitzaz threatens to jam traffic on Thursday
The News, August 26, 2008
By Sohail Khan

ISLAMABAD: Supreme Court Bar Association (SCBA) President Chaudhry Aitzaz Ahsan on Monday threatened to jam traffic in the entire country on August 28 if the Murree Declaration was not implemented in letter and spirit.

Addressing a press conference here at his residence, Aitzaz said the legal fraternity, along with the entire nation, would be staging countrywide sit-ins on August 28 to protest the delaying tactics of the government in the reinstatement of the deposed judges of the superior judiciary.

He said the lawyers were forced to resume their movement as the government had failed to honour its commitments. He reiterated the lawyers’ demand for the early implementation of the Murree Declaration in letter and spirit.

The SCBA president said the legal community had removed black flags from the bars after the Islamabad Declaration on August 7, but the failure of the deceleration had compelled them to hoist the flags again, which was unfortunate.

He said that the slain prime minister Benazir Bhutto had herself said that Iftikhar Muhammad Chaudhry was her chief justice and that she had vowed to reinstate him. He said parliament was the only hurdle in judges’ restoration.

He said the strength of the lawyers should not be underestimated, saying they would jam the whole country on August 28 for two hours to press the government for the restoration of the judges.

Aitzaz Ahsan said that the legal fraternity had shown flexibility and extended the deadline for judges’ restoration at many times but now it had resolved to resume its countrywide protests until the judiciary was restored.

He said the lawyers would now follow the decisions of the National Coordination Council (NCC) instead of the Pakistan Bar Council (PBC). He said that the civil society, political workers, professional bodies, trade unions, students’ unions, women organizations and traders would participate in the protests, adding that the sit-ins would completely be peaceful and non-violent.

He said they were assured of cooperation by different trade unions and by the business community, hoping they would observe a complete shutter-down strike on August 28. He said the lawyers’ representatives from all the bar associations of the country would also stage a peaceful sit-in in front of the Parliament House on September 4 to record their protest.

Aitzaz apologised in advance to the general public and the school owners for any inconvenience during their protests. However, he assured that they would try their best to let the school vans and the ambulances ply on the roads. He also appealed for the closure of the educational institutions on August 28.
Reactions: