Rarely in situations of such volatility as Pakistan faces today is the objective so clear. Pakistan needs stability. The greatest threat to the country derives from internal terrorism, lawlessness and fractured regional politics.

Can national stability best be secured through a strongman government of the kind offered by the President, Pervez Musharraf? Or is stability best guaranteed through a democratic election that restores civilian rule committed to cracking down on extremist violence, building the rule of law and delivering services to the people? Benazir Bhutto promoted the second option. Tragically, she died doing so.

The former prime minister's assassination is being called a victory for the forces of extremism and a heavy setback for the cause of democracy. Her murder brought down an eloquent advocate for both a progressive state and society and more aggressive policies against al-Qaeda and domestic terrorists.

Many may argue for proceeding with the parliamentary elections scheduled for tomorrow week. The hope is that free and fair elections could calm the anger over the events of last week and prevent a return to military dictatorship.

The trouble with this thinking is that most Pakistanis believe the election process is already unfree and unfair. Changes Musharraf made to the courts and constitution during the recent six weeks of emergency rule had tilted the process in his favour long before Bhutto was killed. These elections are already too tainted to win public credibility.

We believe the path to a stable Pakistan does begin with elections, but not through the process that is unfolding. What Pakistan needs is a pause and then a bold regrouping. Elections are an opportunity, however challenging, to change the tenor and course of the country's politics - of being a transforming event.

If Musharraf is to remain president, he should reach out to all political parties in a spirit of national reconciliation. This represents the best hope of saving Pakistan from an extended period of instability. His first step should be to name a neutral caretaker government, one whose members are selected on the basis of consultation with the major political groups.

Musharraf would instantly win national approval if he reappointed the Supreme Court justices he deposed during emergency rule; this would be a magnanimous gesture of his commitment to building an independent judiciary. A new federal election commission, willing and capable of enforcing its own regulations, must be named, and the present campaigning restrictions must be lifted. The authorities should also update the jerry-built electoral rolls to better insure against disenfranchising some voters and allowing others to cast fraudulent ballots.

Government limitations on media coverage of politics should be lifted. Most critical, the administration of elections must be taken out of the hands of local officials, many of whom are loyal to the governing party above all else.

Ideally, out of this new political chemistry another breed of leaders will emerge - one defined by a commitment to democratic principles and values rather than family or regional affiliation. From its current low point, Pakistan has a rare chance for renewal or, even more boldly, reinvention.

An election held without these changes would result in victors who lack credibility and would almost certainly provoke a violent backlash. Reforming the process and establishing ground rules among the parties in a new political compact will take months. But these changes can be conducted in a spirit of inclusion and transparency so that a longer process of change does not appear as just an excuse for extending Musharraf's dictatorial powers. Above all, the military must stand back from the political scene and exercise its legitimate role of defending the nation and constitution.

The US role in Pakistan is delicate. Our relationship is with the Pakistani people, not one man or one institution. Our close embrace of Musharraf (and, to an extent, Bhutto) contributes to his unpopularity and to low US approval ratings in Pakistan. We must support honest attempts to foster reconciliation across civil society. Above all, the US must not be seen to be engineering a political outcome. This is the surest way to undermine what we are hopeful of achieving. The US has a high stake in Pakistan's stability, but we must leave the selection of Pakistan's leaders to the Pakistani people.

Wendy Chamberlin is a former US ambassador to Pakistan; Marvin Weinbaum is a former State Department Pakistan analyst.

Also See:
The Mourning After - By Hussain Haqqani, Indian Express - December 30, 2007
In pictures: More Pakistan unrest - BBC
Pakistan inches back to 'normal' - AFP
Pakistan's flawed and feudal princess - William Dalrymple, The Observer
My long journey with a vulnerable but brave charmer By Jason Burke - The Observer 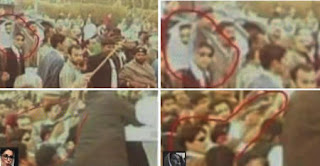 This series of pictures obtained exclusively by Dawn television channel from an amateur photographer show the alleged shooter who fired at former premier Benazir Bhutto before another man blew himself up near her vehicle. The channel said the images matched the video released by the Interior Ministry a day earlier. daily times

Basi Roti Phata Kapra said…
Armored SUV with sun roof, is this a joke or what. Even the Pope uses his see thru Pope mobile to greet his flock. Was Ms. Bhutto so naive or just miscalculate the threat, or just paving the way for her son.
The Queen is dead, Long live the King.
12/30/2007 6:56 PM

jackson said…
I agree the key to Pakistans future is political reform although that is very hard due to all the different forces at work over there.