Indian view on Benazir's Assassination and its aftermath

In the preface to the revised edition of her autobiography, Daughter of the East, Benazir Bhutto begins by saying: “I didn’t chose this life; it chose me. Born in Pakistan, my life mirrors its turbulence, its tragedies and its triumphs.” She goes on, “Once again Pakistan is in the international spotlight. Terrorists who use the name of Islam threaten its stability. The democratic forces believe terrorism can be eliminated by promoting the principles of freedom. A military dictatorship plays dangerous games of deception and intrigue. Fearful of losing power, it dithers, keeping the forces of modernisation at bay while the flames of terrorism flourish.” She wrote this in April 2007.

Bhutto represented modernity to the increasingly obscurantist power-brokers in Pakistan and, therefore, a threat to them. She represented, in some ways, a democratic hope for ordinary Pakistanis. She was thus perceived as a threat to the entrenched khaki interests.

Bhutto ended her autobiography with prophetic words. She said, “So as I prepare to return to an uncertain future in Pakistan in 2007, I fully understand the stakes not only for myself, and my country, but the entire world. I realise that I can be arrested. I realise that like the assassination of Benigno Aquino in Manila in August 1983, I can be gunned down on the airport tarmac when I land... But I do what I have to do, and am determined to return to fulfil my pledge to the people
of Pakistan, to stand by them in their democratic aspirations.” It almost happened this way on the day of her arrival.

Ultimately, her prophecy came true. Judging from the last video clips of Bhutto’s life, the assassin knew she was wearing a bullet-proof vest, so he aimed for her neck. He knew her route, and was waiting for her. The assassin or assassins were trained, skilled and the bomb blast was either a fall-back or a diversion to allow escape. We will never know.

It is reasonable to assume that there must have been an assessment about the threat to Bhutto’s life, especially after the October attack. Despite this, the assassin had easy access to his target. This can only mean that those involved in providing her security were lax, or just callous and careless or worse, they were complicit.

The assassination has occurred at a time when Musharraf’s approval rating and his credibility among Pakistanis is at its lowest — lower than that of Osama bin Laden and Bhutto. People are prepared to believe the worst about him and not willing to accept the best from him. There has been a constitutional breakdown and institutional collapse in the country. The former Chief Justice of Pakistan and other judges have been locked up, the media have been gagged, political parties emasculated and other centres of nationalist dissent, like Baloch leaders Akbar Khan Bugti and Balach Marri, killed by Pakistani authorities. Any judicial probe ordered now would lack credibility because the courts have been widely suborned by Musharraf.

It is interesting and worrying to read a recent report (November 2007) by SENLIS Council, a Britain-based international policy think-tank. The report is called ‘Afghanistan on the Brink’, but also discusses Pakistan. There is also a map that shows permanent Taliban presence in all of the NWFP, most of Punjab and northern Balochistan. Sindh is depicted as having substantial Taliban presence. Bhutto’s assassination only emphasises this growing Taliban presence and the support or sympathy they receive from various sections of the Pakistani establishment.

Repeated attacks in recent months on the army and the ISI in Rawalpindi by unknown assailants signify that there is something more sinister happening in Pakistan.

Yet, those who planned and executed this attack must have taken several aspects into consideration. Bhutto’s death leaves the PPP without an effective and acceptable leader. The immediate beneficiaries in an election now would be Musharraf’s boys in the PML(Q), while the blame for the killing falls on al-Qaeda. If the PPP does manage to win the elections riding on a sympathy vote, despite various efforts by the authorities to prevent this, its leadership will be divided and thus easy to handle. If, like the PML(N), the PPP too chooses to boycott the elections, then the PML(Q) will have a free home-run. The hope is that the agitation will eventually die down and the murder will become just another episode in Pakistan’s history.

It does not matter if the elections are described by every Pakistani as a farce, since approval from the US to go ahead with them has already been received. As of now, the elections are supposed to be held on schedule, but if the violence in the country escalates and the army has to be called in, it is possible that they may have to be postponed. The calculation probably is that the leaderless agitation and the anger on the streets will eventually subside. It has to be remembered that the last time elections in Pakistan were ordered by a dictator, the country split. And as already stated in these columns earlier (August 20, 2007), Pakistan faces a bigger crisis today than it did in 1971.

For American policy-makers, having messed around in the region for decades, salvaging US policy means protecting Pakistan.

This, in turn, means bolstering Musharraf under all circumstances, even when it was known that there is institutionalised double-crossing of benefactors in the hunt for terrorists and in the use of largesse supplied. This has been America’s Magnificent Obsession.

The current American blind spot for the generals of Pakistan is similar to that for the Shah of Iran and other surrogates in the past. Unfortunately, instead of persuading the US towards our perceptions of policy towards Pakistan, we are now seen to be following the US in putting all our eggs in a leaking Musharraf basket.

Second, all countries have an army, while in Pakistan, it is the army that has a country. No one denies the importance of the armed forces or intelligence agencies, but unless Pakistan adopts a system of governance where the army retains its special perks and privileges, yet remains subservient to the civil authority, Pakistan will never start to move towards being a ‘normal’ country.

Third, very often, Pakistanis refer to the ‘root cause’, meaning Kashmir, in the context of improving Indo-Pak relations. There is a larger issue here. Pakistan must address its own ‘root cause’ first — its increasingly jehadi mindset. The mullahs are winning in Pakistan thanks to what is taught to its children not just in madrasas but even in mainstream schools. A curriculum of hatred and bigotry only leaves the young with warped notions about the rest of the world as some of them find their way into the corridors of power.

Bhutto’s assassination may make some difference internally in Pakistan but will have little immediate impact on Indo-Pak relations. Her assassination in Rawalpindi, the unofficial capital of Pakistan, only heightens the fact that terrorists have the ability to strike at symbols of power and their own mentors in that country. The extent to which power in Pakistan is being wielded by an intolerant section, in league with some in centres of power, is frightening. The drift towards radicalism and intolerance that began with the jehad in the 1980s has now become a tidal wave which many outside Pakistan fail to recognise or accept.

Danny said…
I dont think RAW is capable of shoplifting a plate of gulab jamuns from Ghantewala's in Chandni Chowk, leave aside assasinating Benazir Bhutto, and carryin gout a whole operation in Liaqat Bagh in Rawalpindi!!! :):)
12/31/2007 11:31 AM

Anonymous said…
Listen to the conversation from a Muslim analyst on the political ramifications on the War on Terror in Pakistan.

Protest - Writing on the Wall 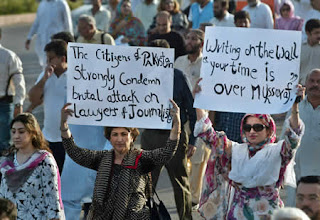