Showing posts from November, 2007
Show all

Mohamed Nimer, director of research at the Council on American Islamic Relations, is the author of "The North American Muslim Resource Guide: Muslim Community Life in the United States and Canada" (Routledge: 2002).

Asma Afsaruddin, associate professor of Arabic and Islamic studies at the University of Notre Dame, is the author of "Excellence and Precedence: Medieval Islamic Discourse on Legitimate Leadership" (Leiden: 2002).

Is it accurate to speak of "Sunni Islam" and "Shi'i Islam"? 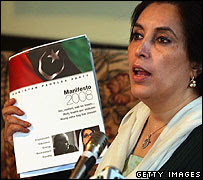 Benazir Bhutto told journalists in the capital Islamabad that the PPP's policies were based on what she called the five Es: employment, education, energy, environment and equality.

For Text click: For Peace and Prosperity in Pakistan - Manifesto 2008

Tragedy in uniform By Ayaz Amir

OUR history, sad and comic by turns, is full of might-have-beens. Pervez Musharraf could have been the golden boy of Pakistani history. If only his vision had not been clouded; if only, to echo Mao, he had the courage to clasp turtles in the deep seas and throw a rope around the stars in the stormy heavens.

But his vision was limited and in the end -- I mean his soldier’s end -- he had lost the ability to differentiate between what was good for him and what might have been good for the country.

In 2004, as he had pledged, if he had taken off his commander-in-chief’s uniform, there would have been some glory in the act and a nation, all too prone to be seized by fits of emotion, would have hailed him as a saviour and deliverer, the story of Pakistan marked by the search for redeeming heroes.

But squelched by his fears or (who knows?) blinded by the temptations of high office, he broke his pledge and took to the road which must have see…
Reactions:
Read more

Inside Pakistan's Drive To Guard Its A-Bombs: Wall Street Journal

But religious extremism does. It's up to the program's internal watchdog, a security division authorized to snoop on its employees, to determine the difference -- and drive out those who breach the boundaries.


In an interview, a top security official for Pakistan's nuclear program outlined a multilayered system put in place over the past two years to try to avoid the kind of devastating lapses uncovered in recent years. A series of rogue scientists were found to have sold secrets or met with al Qaeda leaders, finally spurring a screening-and-surveillance program along the lines the U.S. us…
Reactions:
Read more

Pakistan’s Brighter Future: The View from the Ground

When I returned from Pakistan to the United States this week I was met with a widespread perception among US observers that there has been little mass resistance to the state of emergency declared by General Musharraf. This is simply inaccurate. For their part US policy elites assume that US diplomacy will make a significant difference to the course of events. This too is a dubious proposition. Musharraf feels insecure enough to crack down on perceived threats to his rule. There is a palpable sense in Pakistan that the country is at a historic juncture.

The momentum of events in Pakistan is outside the control of the US government, and resentment against us is high in all political quarters. About the only difference that US policy will make is to the perception of the US among Pakistanis. If we understand and support what the people of Pakistan are demanding, we may salvag…
Reactions:
Read more 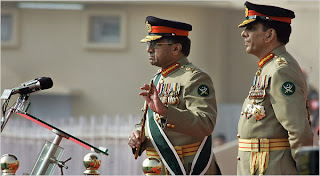 ISLAMABAD - In his old job as Pakistan’s spy supremo he lived in the shadows, but on Wednesday General Ashfaq Kiyani took over as army chief in bright sunshine and with the world’s eyes watching his every move.


President Pervez Musharraf handed the baton of command of the nuclear-armed military to Kiyani, his 55-year-old deputy, in a colourful ceremony on a parade ground at military headquarters in Rawalpindi.

Musharraf paid rich tribute to him in a speech, saying he had known him for 20 years and adding: “I know his professional acumen. He is an excellent soldier.”

But in an indication perhaps of the uncertainty of the army’s loyalties as Musharraf prepares to become a civilian president, he said he was “confident that the army will remain loyal to him (Kiyani) as it has been with me”.

The FP Debate: Should the U.S. Abandon Pervez Musharraf? 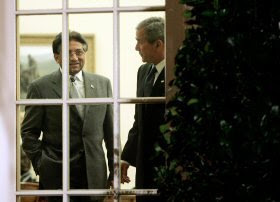 Is it time to send Pervez Musharraf packing? Two top experts on South Asia, Daniel Markey of the Council on Foreign Relations and Husain Haqqani of Boston University, square off on the tottering Pakistani president’s fate.

The United States should hold its nose and stick with Musharraf. He currently occupies a unique position in Pakistani politics and could still serve as an essential transitional figure during the next few weeks, months, and possibly even years.

In the immediate term, Musharraf offers Washington continuity in the face of uncertain political transition. He is a familiar face, a leader with whom the Bush administration has established a sustained working relationship. Under even the smoothest possible transition scenarios, Musharraf’s departure would interrupt bilateral cooperation on military, counterterrorism, and…
Reactions:
Read more

A Tale of Two Bhuttos

Benazir Bhutto knows how to tell Western audiences what they want to hear, but when the former prime minister had a chance to shut down Pakistan’s nuclear Wal-Mart, she looked the other way instead.

With Pakistan in turmoil and the Bush administration rapidly losing patience with Gen. Pervez Musharraf, the time seems ripe for Benazir Bhutto’s return to power. But how would the former prime minister handle the most critical international issue confronting Pakistan today? We are not talking about dealing with Islamic extremists within its borders, though that is perilous enough. Even more critical to the international community is the matter of securing Pakistan’s nuclear arsenal and eradicating the final vestiges of A.Q. Khan’s nuclear Wal-Mart. Bhutto may say all the right things on this issue, but history raises troubling questions about her performance when it comes to nuclear weapons.

Back to the 'stone age': By Shamshad Ahmed 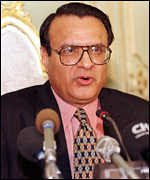 Mr. Shamshad Ahmed is a former Foreign Secretary of Pakistan

Whether or not Richard Armitage said it, we have already gone back to the 'stone age'. The US did not have to bomb us to make Tora Bora out of Pakistan. We have done it ourselves.

Like the ape-men of the Paleolithic and Neolithic periods of the 'stone age', we are also fighting among ourselves as enemies of each other, and our sole 'equipment' for solving our problems now is our 'instinct' devoid of any tolerance and rationality. Like the early primates, we are no longer living in an organised or civilised state, and have no taste for the 'rule of law' or good governance.
We have really gone back to the 'preliterate' culture. We are good only at the 'use of fire, rocks, batons, clubs, tear gas and all sorts of other weapons' in running our day-to-day affairs, and our talent for learning is limited…
Reactions:
Read more

President Pervez Musharraf is expected to resign as head of the army shortly before being sworn in for another term as president, this time as a civilian.

The BBC's M Ilyas Khan in Karachi looks at the prospects for Gen Musharraf, Benazir Bhutto and Nawaz Sharif, the three biggest names in Pakistani politics as they vie for power. - BBC - November 27, 2007

What the Saudis Want from Annapolis

Saudi Arabian Foreign Minister Saud al-Faisal tells TIME that he is optimistic about this week's Middle East peace conference in Annapolis because of what he calls U.S. determination "to see this through." Continuous U.S. mediation in post-conference negotiations, including pressure on Israel, he says, "can turn things around" and lead to a comprehensive settlement before President Bush's term expires in 13 months.

But, speaking in Paris just hours before his scheduled arrival in the U.S., Prince Saud warned Israelis that they would have no peace until Israel withdrew from Arab territories captured in the 1967 war. Saud, who will be the highest-ranking Saudi to ever attend a peace conference with the Jewish state, added that he would not shake the hand of Prime Minister Ehud Olmert or make a symbolic visit to Jerusalem before a peace deal. "The hand that has been exte…
Reactions:
Read more

Is the NWFP Slipping out of Pakistan’s Control? 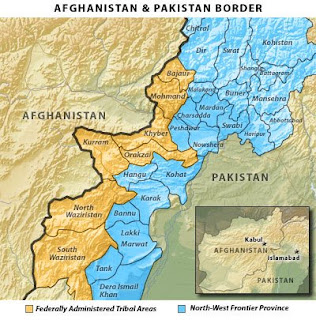 Is the NWFP Slipping out of Pakistan’s Control?
By Hassan Abbas
Terrorim Monitor, Volume 5, Issue 22 (November 26, 2007)

A discredited military regime in the center, the problematic rule of a religious political alliance (Muttahida Majlis-e-Amal, or MMA), ill-planned military operations in the adjacent Federally Administered Tribal Areas (FATA) belt and the growing unpopularity of the “war on terror” have all tarnished the socio-political fabric of society in the North-West Frontier Province (NWFP) of Pakistan. The growth of Talibanization and insurgency in parts of the NWFP are consequences of these factors. Events in the province’s Swat district such as the rise of the Tehreek-e-Nafaz-e-Shariat-e-Mohammadi (TNSM, Movement for the Enforcement of Islamic Laws) are signs of the increasing security threat to the state of Pakistan. It is difficult, however, to pinpoint the real nature of the crisis. Framing the overall crisis in the region as a “Pashtun insurgency” provides a context, but i…
Reactions:
Read more

"If You Were to Seek My Counsel, General"

As a long-time student and researcher of public opinion, I am frequently asked the question these days: How has the public reacted to imposition of emergency, or martial law, in Pakistan? For many of my interlocutors it is a rhetorical question. They simply wish to reconfirm and reinforce their own perceptions and views of their friends and acquaintances. I am amused and a bit irritated. Yet, in this particular case it is true that their perceptions find an echo in public opinion polls. Public reaction to the emergency and suspension of the Constitution is overwhelmingly negative. When views are so skewed in one direction, the real question is not "what" is the opinion; instead it is more meaningful to ask the "why" question. Why are views so one-sided and can we identify the grounds for uniformity of views.

But first, the public opinion itself. In a survey (the sample size of w…
Reactions:
Read more
More posts