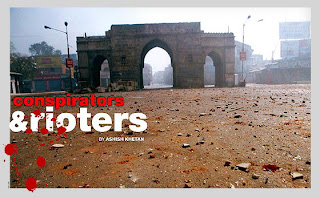 There were the cool strategists — leaders, officials, ideologues. And then there were the foot soldiers, who raped, killed and looted. The genocide was clinical
Tehlaqa.com: Nov 3, 2007

THERE WAS no spontaneity to what happened in Gujarat post- Godhra. This was no uncontrived, unplanned, unprompted communal violence. This was a pogrom. This was genocide.

In a planned, coldly strategic manner, Muslim neighbourhoods across both urban and rural Gujarat were targeted. Large sections of Hindus were united under a single objective: to kill Muslims, wherever and by whatever means, preferably by first stabbing and mutilating them, and then by setting on fire what remained, whether dead or alive. During the course of the TEHELKA sting, many accused said they preferred burning Muslims alive over other forms of death since cremation is considered unacceptable in Islam.

For three days after the February 27 fire on the Sabarmati Express at Godhra, Gujarat’s BJP government receded from public view and let the armed mercenaries of Hindu organisations take over. For three days, absolute anarchy reigned. Execution squads were formed, composed of the dedicated cadre of Hindu organisations — the Vishwa Hindu Parishad, the Rashtriya Swayamsevak Sangh, the Bajrang Dal, the Kisan Sangh, the Akhil Bharatiya Vidyarthi Parishad and the Bharatiya Janata Party. Masjids and dargahs were destroyed across the state. Seventy-three Muslim religious places were torched in Ahmedabad alone, 55 in Sabarkantha, 22 in Vadodara.

The architects of Gujarat’s greatest shame were of two sorts. There were the coolheaded strategists, the conspirators, who plotted the carnage from behind the scenes. And there were the foot soldiers, the members of the saffron army, drugged on the vicious agenda of so-called Hindutva, who went out and looted, raped and killed. On occasion, the planners were also sometimes emboldened to go out and participate in the massacres.

Overview
First-hand accounts from the men who plotted and executed the genocide in Ahmedabad, Vadodara and Sabarkantha. Mayhem was meticulously planned and carried out by VHP-Bajrang Dal cadres across Muslim localities.

NARENDRA MODI visited Godhra on the day of the burning of coach S-6 of the Sabarmati Express. His outburst provided the first sign to Sangh workers that the time to corner the Muslims had come

THAT VERY NIGHT, top BJP and Sangh leaders met at Ahmedabad, Vadodara and Godhra, and gave the green signal for an all-out assault on Muslims across the state

A STRATEGY was devised on how to shield the attackers from the law after the riots. Prominent lawyers were briefed and senior police officers taken into confidence. The cadres were told Modi was squarely behind them

THE MOBILISATION of the under castes, something the Sangh had been engaged in for years, dovetailed into the deep penetration Hindutva already had among Gujarat’s higher castes. Godhra provided the perfect spark to fuse them together

FROM THE very outset, the police played partisan, often joining the mobs. Officers who tried to do their duty found their hands tied. The complicity was led by then Ahmedabad Commissioner PC Pandey, who ensured compliance by a swathe of junior officers

WEAPONS, FROM BOMBS to guns to trishuls, were either manufactured and distributed by Sangh workers themselves, or smuggled through Sangh channels from all over India. The Bajrang Dal and the VHP already had a large cache of firearms and daggers

BJP MLA MAYABEN KODNANI drove around Ahmedabad’s Naroda locality all day, directing the mobs. VHP leaders Atul Vaid and Bharat Teli did the same at the Gulbarg Housing Society. None of them ever went to jail

FIRE WAS THE MOST FAVOURED weapon in the rioters’ hands. That cremation is considered un-Islamic fuelled their frenzy to burn. Petrol and kerosene were lavishly used, as were the victims’ own gas cylinders

BABU BAJRANGI reveals he collected 23 revolvers from Hindus in Naroda Patiya. He called VHP general secretary Jaideep Patel 11 times and informed Gordhan Zadaphia, the then minister of state for home, about the death toll

GOVERNMENT COUNSEL before the Nanavati-Shah Commission, Arvind Pandya, himself worships Modi and describes Justice Shah as “our man”. Nanavati’s own report on the 1984 anti-Sikh riots is gathering dust till today