Showing posts from May, 2007
Show all

Comparisons between Pakistan Army and the Indian Army

In CNBC’s ‘India Tonight’ programme broadcast on April 30, Karan Thapar presented an interview with Lieutenant-General J.F.R. Jacob, who was Chief of Staff of the Indian Army’s Eastern Command during the Bangladesh campaign of 1971, and who was after his retirement Governor of Goa and Governor of Punjab, in the context of the Government’s decision to give Field Marshal S.H.F.J. Manekshaw back pay for the period since his retirement from service over 36 years ago. There is a particular focus here on his role, as well as General Jacob’s role, in the Bangladesh campaign. This is an edited but substantially intact version of the transcript provided by CNBC:

Karan Thapar: Recently the Government gave Field Marshal Manekshaw a cheque for Rs. 1.6 crore in lieu of the salary he should have received as Field Marshal but didn’t get over the last 36 years. You have worked very closely with him. In 1971 when he was …
Post a Comment
Read more

LONDON, May 30: Pakistan is only six places away from being the most dangerous country in the world, and ranks even lower than Lebanon. A study launched on Wednesday declares Norway the world’s most peaceful nation and Iraq the least. Ranking below Pakistan are Columbia, Nigeria, Russia, Israel, Sudan and Iraq.

The Global Peace Index, published a week before a Group of Eight (G8) summit in Germany, rates 121 countries from Algeria to Zimbabwe on some 24 factors including levels of violence, organised crime and military expenditure.

While most European countries including Britain rank in the top, more peaceful half of the league table, the United States is nearer the bottom in 96th place, while Iraq is at the bottom at number 121.

“This is a wake-up call for leaders around the globe,” said Steve Killelea, who commissioned the study from the Economist Intelligence Unit, which is linked to the news weekly The Economist.

ISLAMABAD, Pakistan: President Gen. Pervez Musharraf has survived two al-Qaida assassination attempts, toughed out opposition to his alliance with the United States and kept the support of his fellow generals for more than seven years.

But from the columns of Pakistan's weightiest newspapers to the streets of its political heartland, the view is growing that his bungling attempt to remove the country's top judge has left him seriously weakened at home — and perhaps close to the exit.

"Musharraf says he saved Pakistan after 9/11, but I think he has failed," said Javed Arshad, a 26-year-old shopkeeper in Multan, a city in Punjab, the country's dominant province and a key battleground in upcoming elections. "Musharraf is on the way out."

The general, who seized power in a bloodless 1999 coup, has presided over a period o…
Post a Comment
Read more 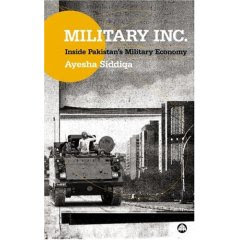 ISLAMABAD - A Pakistani analyst launched her book on the military’s penetration of the economy on Thursday after she and her publisher said they were forced to change the venue at the last minute due to government pressure.


The book by Ayesha Siddiqa, a political analyst and former director of research at the Pakistan navy, tackles the virtually taboo subject of the military’s huge business empire, which she estimates is worth $10 billion.

Siddiqa had to cancel the planned launch at the capital’s top private club, the Islamabad Club, and had to scramble to find an alternative venue.

She later said while writing the book, many of her friends had tried to warn her off the sensitive subject.

“What has happened to the launch today bears witness to the fact that my friends’ apprehensions were correct,” she told the launch, held in a crowded office of a non-governmental group.

"Pakistan's role in the War on Terrorism": From Talk Radio News Staff Blog

Heritage Foundation held a discussion to discuss “Judicial Crisis and the Future of Democratic Reform” in light of recent events in Pakistan. Moderated by Lisa Curtis of the Heritage Foundation, the panel was extremely distinguished.

A short summary was given; basically, this is a trying time for Pakistan. They are fighting the Taliban, General (and President) Pervez Musharraf is becoming more autocratic and on March 9th the Chief Justice (Iftikhar Muhammad Chaudhry) was forcefully removed from office.

Shuja Nawz began by saying it is “Déjà vu, all over again.” What began was an “autocratic leader with liberal intentions” has degraded in to an unevenly growing economy and a President “that won’t leave soon or quietly.” Public opinion of the “W…
Post a Comment
Read more 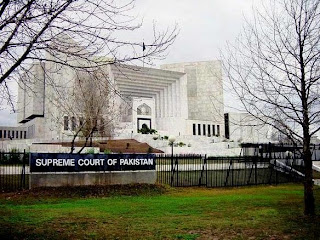 ‘Get your facts first, and then you can distort them as much as you please’. Mark Twain

Pakistan is in the throes of a judicial crisis since March 2007. On March 09, 2007, general Pervez Mussharraf summoned chief justice Muhammad Iftikhar Chaudry to army house. He was asked some tough questions and then asked to resign. Chief justice held his ground and refused. He was kept at army house for several hours so that an acting chief justice could be sworn in. Justice Javed Iqbal was sworn in as the senior most judge justice Rana Baghwan Das was out of country. Chaudry was given the title of ‘suspended’ chief justice and his case referred to Supreme Judicial Council (SJC) for action. This started a crisis where majority of the people denounced the cavalier manner in which general Mussharraf dealt with the chief justice. Legal community fully supported chief justice by boycotting courts and b…
Post a Comment
Read more
More posts