Showing posts from December, 2006
Show all

State Brutality in the era of "Enlightened Moderation" 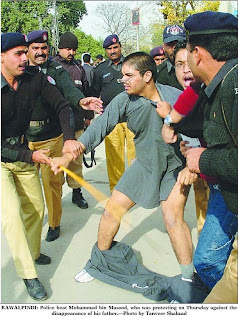 Rawalpindi: Police beat Mohammad Bin Masood who was protesting against the disappearance of his father
From Dawn, December 29, 2006
4 comments
Read more

Central Command of the Muslim World?

The question of authority in Islam is as old as the religion itself, and the historian will be the first to tell you that since time immemorial, countless Muslim scholars from Al Ghazali to Ibn Taimiyya to Ibn Khaldun have been grappling with the question of power and discursive authority among Muslims to address the fundamental question: “Who speaks for Islam?” So important has this concern grown over the past few years that this writer alone can claim to have attended no less than a dozen conferences since September 11, 2001 that were convened around the same — admittedly tiring and outdated — question.

Now the question has been raised again in Malaysia with the Director of the Malaysian Islamic Research Institute (IKIM) Dr Syed Tawfik Al-Attas’s proposal that the Malaysian government pave the way for the creation of the office of Grand Mufti of Malaysia, ostensibly to bring an end to the in…
Post a Comment
Read more

House of Saud's School of Thought!

December 30, 2006
Saudi cleric labels Shias ‘infidels’Reuters: December 30, 2006
DUBAI: An influential cleric of Saudi Arabia’s hardline Sunni school of Islam has denounced Shia Muslims as “infidels” in a new religious edict that comes amid rising sectarian tension in the region. “The rejectionists (Shias) in their entirety are the worst of the Islamic nation’s sects. They bear all the characteristics of infidels,” Sheikh Abdel-Rahman al-Barrak said in the fatwa, or ruling, distributed on Islamist websites. “They are in truth polytheist infidels, though they hide this,” the fatwa said, citing theological differences 14 centuries after the death of the Prophet Mohammad (PBUH), such as reverence of shrines which followers of Saudi Arabia’s Wahhabi school consider abhorrent. Concern is growing in Saudi Arabia over Shia-Sunni violence in Iraq which has taken the northern neighbour to the brink of civil war. Sunni-Shia tensions are also high in Lebanon, where Shias are leading efforts to bring down a Sunni-l…
1 comment
Read more

Muslim World in the face of Sectarianism and Terrorism 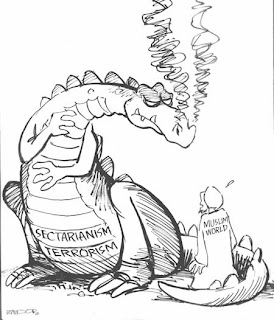 "I Don't Think We Westerners Care About Muslims" 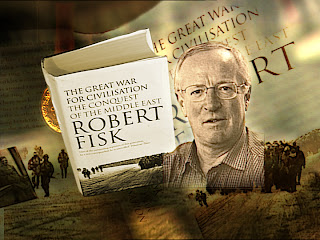 ROBERT FISK: Ladies and gentlemen, when I first went to the Middle East -- on holiday from Belfast, of all places -- 1972, I went to Egypt, and anxious to try and pick up a few first words of Arabic, I had the misfortune of purchasing a very old book produced by the British army in Egypt in the 19th century. I still recall the three principal clauses which you were advised to learn if you were an Englishman: "We shall board the steamship, for there is talk of war," "Help," and "Where is the British embassy?" And I can tell you, I never believed I would actually watch people say these things, as I had to in Lebanon this last summer. There were all the refugees, all the foreigners, boarding the steamships because there was a real war, all wanting help and all demanding to know the way to their n…
1 comment
Read more 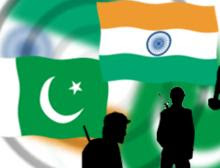 Special Report: The national-security state
Aitzaz Ahsan, former Interior Minister, the Pakistan People’s Party
HIMAL South Asian,Vol. 19, No. 9: December 2006
The pain of the Partition has left a legacy. There also persists in some quarters a fairly widespread fragility syndrome – as if Pakistan would revert one day to India, and that it is a fragile state. It was something that was attributed to Jawaharlal Nehru. This held the minds of Pakistani intellectuals, because there was a crisis or a certain inability to properly identify and realise one’s own identity. The only way we could identify ourselves was that we were Muslims. But the presence of a large number of Muslims in India, the creation of Bangladesh, among other things, weakened this proposition. The fragility syndrome helped suppress these uncomfortable questions – you don’t ask questions, you cannot seek answers because Pakistan is fragile, India is hostile.

17 Banned Militant Groups Cannot Collect Hides: BUT Jamaat-ud-Dawa and Sunni Tehreek are Just on the Watch List (read: they can collect hides)!

ISLAMABAD: The government has told the provinces to make sure that 17 banned religious and militant organisations are not able to collect the hides of sacrificial animals on Eidul Azha.

“The Interior Ministry has issued this directive to the four provinces and the Islamabad district administration while asking them to step up security around places where Eidul Azha prayers will be offered,” sources said.

Fair Retrial of Zulfikar Ali Bhutto: A Chance for Judiciary to Redeem Itself

A former Supreme Court judge's contentious remarks while speaking at a lecture organised by the PPP, revolving around the possibility of a reopening of Zulfikar Ali Bhutto's case, will surely spark-off a heated debate across the country. The controversy, as is clearly evident by the continued debate on the topic, remains as potent today as it was nearly 30 years ago. The enigmatic Bhutto was unceremoniously dismissed in 1977, and subsequently hanged, by the incoming Martial Law of Ziaul Haq after being controversially found guilty by the Lahore High Court for conspiracy to murder. However, one cannot help but feel that the matter is long passed and the nation today faces many more important issues which deserve immediate attention. A reopening of this case would just tie up Pakistan's already thin judicial resources, which would, in turn, further exacerbate the backlog problem in the courts. In addition, the violent pol…
Post a Comment
Read more

Will the U.S. Attack Iran?

Contrary to prevailing expectations, the Bush Administration is going ahead with its old plans to invade Iran. Since Israeli interests define the US agenda in the Middle East, the only chance that the US will abandon its decision of invading Iran is if the Zionist state changes course. So argues Scott Ritter in his new book, Target Iran: The Truth about White House’s Plan for Regime Change. But for now, it does not seem likely.

In the aftermath of debacle in Iraq and the electoral backlash of the November 2006 Congressional election, one would expect the Bush Administration not to take on another disastrous adventure in the Middle East. However, the newly initiated mammoth naval build-up in the Persian Gulf confirms fears that the Bush Administration has not learned its lesson and is going ahead with its old plans to invade Iran. Stretched to the limit, the US army may be resisting such a venture, but i…
1 comment
Read more

State-run television showed the female contingent, clad in khaki cadet slacks, some wielding swords and others holding guns, marching to military tunes with their male colleagues in a ceremony at the mausoleum of Mr Jinnah, the Father of the Nation, in Karachi. In November, for the first time in the history of Pakistan, the Pakistan Military Academy Kakul opened its doors to women. In March, women also broke into the all-male air force when it inducted four women pilots.

Forty-one females joined the army academy to undergo a rigorous six months of military training along with men before being inducted as officers in various branches of the army.

Thieves, murderers, rapists; and how the Pushtuns' ancient tribal code is fighting for survival against radical Islam


IN A cinema hoarding in Peshawar's Khyber bazaar, Arbaz Khan brandishes a Kalashnikov rifle with a muscular brown arm dripping with scarlet blood. Two nicely plump, pink-cheeked maidens are arranged on the grey rocks behind the actor, manacled and in chains. Mr Khan's roaring, jet-moustachioed mouth bellows the name of the film: “It is my sin that I am Pushtun!”

As an examination of moral equivalence, the film raises difficult questions. To simplify: Mr Khan's father is killed in a blood-feud, after which, according to the tribal code of the Pushtuns—or Pakhtuns, or Pathans, as they are also called—Mr Khan's uncle should marry his dead brother's widow and accept Mr Khan as his son. But Mr Khan's mother is rather long-in-the-tooth, so Mr Khan's uncle (or father…
Post a Comment
Read more

If there is a single consistent theme in Pervez Musharraf’s memoir, it is the familiar military dogma that Pakistan has fared better under its generals than under its politicians. The first batch of generals were the offspring of the departing colonial power. They had been taught to obey orders, respect the command structure of the army whatever the cost and uphold the traditions of the British Indian Army. The bureaucrats who ran Pakistan in its early days were the product of imperial selection procedures designed to turn out incorruptible civil servants wearing a mask of objectivity. The military chain of command is still respected, but the civil service now consists largely of ruthlessly corrupt time-servers. Once its members were loyal to the imperial state: today they cater to the needs of the army.