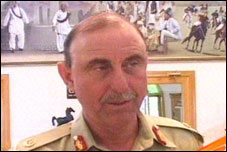 Says US, Nato and Kabul closing their eyes to reality | 50,000 more troops needed | Hopes for treaty in Bajaur
Reuters

ISLAMABAD: The United States and NATO face a snowballing war in Afghanistan and will suffer a military disaster unless they back peaceful means to end the conflict, NWFP Governor Ali Mohammad Jan Orakzai said on Friday.

He said Washington, NATO and the Afghan government were “closing their eyes” to the reality that a military-based strategy was making matters worse. “Either it is lack of understanding or it is a lack of courage to admit their failures,” Orakzai said. “Like in Iraq, it was the lack of courage to admit their faults. They have admitted them now but at very great cost.” Rather than fighting just the Taliban, Orakzai said, NATO forces now faced a wider revolt from Afghanistan’s Pashtun ethnic majority that had grown alienated because of indiscriminate bombings, economic deprivation and a lack of representation. “The people have started joining the Taliban. It is snowballing into a nationalist movement if it has not already become one. It is becoming a sort of war of resistance,” he said. US military officials in Kabul have said insurgent activities have tripled since the truce was called, but Orakzai said linking the statistics to the peace accord was nonsensical. He is now pushing for a similar deal to be struck among the Pashtun tribes on both sides of the border through a jirga, or tribal council, a traditional means of conciliation among warring parties.

“If we can achieve the objectives through political process I think it is the more economical method to do it. If we succeed, very good, and if not who is to deter us from returning to a military strategy,” Orakzai said. The governor said he had outlined his proposal to President George W Bush when he accompanied President Pervez Musharraf to the White House in September. He had told Bush that after five years, the military strategy had failed to achieve any of the US objectives in Afghanistan. Osama bin Laden and Mulla Omar remained at large, reconstruction had been minimal and democracy did not exist beyond “the confines of a few palaces in Kabul”, he said. “It’s time to reflect whether that strategy is working or not. Obviously it is not,” Orakzai said. The 32,000 British-led NATO forces were too few to defeat the insurgency, according to Orakzai. “If they think military is the only option, they should bring another 50,000 troops,” he said, comparing it with the 80,000 men Pakistan had just on the border.

Orakzai dismissed the accusations. He said peace pacts in North and South Waziristan had stopped infiltration and he still hoped for a similar deal in Bajaur. Orakzai said the unrest was spreading before the North Waziristan pact. “If that trend was allowed to continue, it could have threatened the stability of the rest of the country.” President Musharraf sent the army into Waziristan in 2003 to flush out Al Qaeda fighters.

President Musharraf and Afghan President Hamid Karzai have traded allegations over the violence, with Karzai accusing Pakistan of allowing foreign and Pakistani militants and Al Qaeda operatives to use tribal areas in NWFP as a rear base.