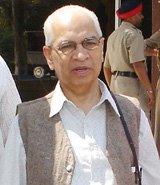 Justice Rana Bhagwandas, a Hindu, took oath here on Wednesday as acting chief justice of Pakistan in the absence of Chief Justice Iftikhar Muhammad Chaudhry who left on a foreign tour.

Justice Bhagwandas, the senior-most judge of the Supreme Court after the chief justice of Pakistan, had held this temporary charge in September last year too.

He was elevated to the Pakistan High Court in 1994 and joined the Supreme Court in 2000.

Justice Bhagwandas is the second non-Muslim judge in Pakistan to reach the top position in the judiciary.

Justice AR Cornelius, a Christian , had served as the chief justice during 1960-68.

He is considered an expert on constitutional law . Besides graduation in law, he has also done his masters in Islamic Studies.
Reactions: