Gen. Abiaid should inform his hosts how the US military is subserviant to its democratic leadership 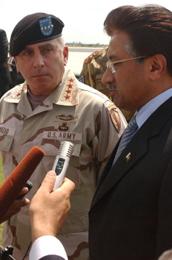 RAWALPINDI: Pakistan and the US decided on Monday to take defence and military cooperation to another level.

The decision was made at a meeting between General John P Abizaid, commander of the US Central Command, and Vice Chief of Army Staff General Ahsan Saleem Hayat. Sources said that both sides had agreed to bolster defence relations. Gen Abizaid held out his assurance that the US would train the Pakistani military. He acknowledged Pakistan’s role in the war on terror. Gen Abizaid will meet President General Pervez Musharraf today (Tuesday). online
Reactions: