"Winning Muslim Hearts and Minds": A Project in Doldrums? 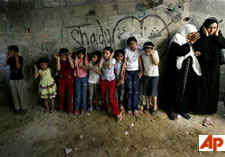 Watching media images of massacred children in the city of Qana in Lebanon is very painful for any human being. For the Bush administration's efforts to win over the hearts and minds of Muslims, this is devastating. The "mistake" was committed by Israel, but Muslims see the United States in every frame.

The Israel-Hezbollah bloody conflict is in its fourth week (now) and civilians on both sides of the border have paid heavily, though the destruction of infrastructure and loss of human life is much more pronounced in Lebanon. Israeli claims that they are (very) cautious not to target civilians cannot be taken at its face value given the facts on ground. Hezbollah is not blameless, but Muslims believe that Israeli technology and resources are so great that calling civilian casualties "collateral damage" has a hollow ring.


A glance at the newspapers in the Muslim states indicate growing frustration and humiliation. Gruesome images are broadcast almost round the clock throughout the Muslim world. For instance, Pakistani popular television networks GEO TV and ARY have correspondents in Lebanon showing death and destruction every hour. And these channels are run and managed by progressive and liberal people - in one case by an American-educated Pakistani who is pro-Western.

The heart of this argument is that mainstream Muslims are deeply influenced by this crisis and what they see is undeniable U.S. complicity, from supporting Israel at the United Nations to supplying the bombs and aircraft that deliver them.

As Washington's fragile stature is tarnished further, Hezbollah rises to new levels of heroic acceptance among educated Muslims who were not inclined to feel this way not so long ago.

The famed Arab street also is increasingly perturbed. Arab public opinion can hardly be gauged from the statements of President Mubarak of Egypt, King Abdullah of Jordon or the House of Saud. Their initial criticism of Hezbollah did not reflect the people they govern. Instead, their views were seen through the prism of the Shiite-Sunni equation and fears of a rising Iran.

Even those voices have been silenced by the scale of the violence and indiscriminate Israeli bombing. The street has moved into the palaces. A rapid consensus is developing against American policy in the region.

The US position on the issue has its own rationale - supporting its staunch ally Israel at a difficult time and ensuring that its enemy Hezbollah is annihilated. However, blocking UN ceasefire efforts when civilian deaths are soaring only inflames Muslims, as well as some non-Muslims.

It is difficult to see how all this serves even Israeli interests. If anything, Israel has unwittingly shored up the fortunes of the extremist forces in the Arab world.

Even as the image of the United States plunges among Muslims, there is opportunity. A comprehensive peace deal for the region, which must include recognition of an independent Palestine, offers a road map out of the quagmire. Peace with the Palestinians would rob Muslim hardliners of a potent slogan and ease the way toward neutralizing Hezbollah’s military arm. Sustainable peace will fall like a ripe fruit in the US lap. History teaches us that military superiority alone, potentially is a transitory thing - given its history and ideals of its founding fathers, the US deserves much more.

Omar Khawaja is a physician based in Chicago and loves to blog.
Reactions: