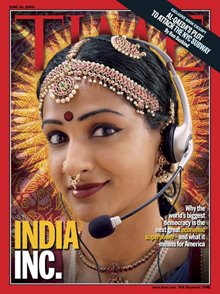 (Time.com) You may not be aware of it, living in the United States, but your world is increasingly being shaped by India.

Even if you've never been to India, eaten its food or watched its movies, there is a good chance you interact with it every day of your life.

It might be the place on the other end of that call you call you make if your luggage is lost on a connecting flight, or the guys to whom your company has outsourced its data processing. Every night, young radiologists in Bangalore read CT scans e-mailed to them by emergency-room doctors in the U.S.

Few Americans are surprised today to learn that their dentist or lawyer is of Indian origin, and the centrality of Indian brainpower to California's high-tech industry has long been documented.

In ways big and small, Indians are changing the world, and may become even more influential in the decades ahead.

That's because India -- the second most populous nation in the world, and projected to be by 2015 the most populous -- is itself being transformed. In the tradition of writers citing Asia's "tiger" economies and the Chinese "dragon," now comes the elephant.

India's economy is growing more than 8 percent a year, and the country is modernizing so fast that old friends are bewildered by the changes that occur between visits.

The economic boom is taking place at a time when the U.S. and India are forging new ties.

During the Cold War, relations were frosty at best, as India cozied up to the Soviet Union while successive U.S. administrations armed and supported India's regional rival, Pakistan.

But in its wake, relations grew steadily closer and in 2004, the Bush administration declared India a strategic partner and proposed a bilateral deal (presently stalled in Congress) to share nuclear know-how. After decades when it hardly registered in the political or public consciousness, India looms large on Washington's world map.

Among U.S. policymakers, the new approach can be explained simply: India is the un-China. One Asian giant is run by a Communist Party that increasingly appeals to nationalism as a way of legitimating its power. The other is the world's largest democracy.

The U.S. will always have to deal with China, but it has learned that doing so is never easy with a country bristling with old resentments at the hands of the West.

India is no pushover either, but democrats are easier to talk to than communist apparatchiks. Making friends with India is a good way for the U.S. to hedge its Asia bet.

Democracy aside, there is a second way in which India is the un-China -- and it's not to India's credit. In most measures of modernization, China is way ahead.

Last year per capita income in India was $3,300; in China it was $6,800. Prosperity and progress haven't touched many of the nearly 650,000 villages where more than two-thirds of India's population lives.

Backbreaking, empty-stomach poverty, which China has been tackling successfully for decades, is still all too common in India. Education for women -- the key driver of China's rise to become the workshop of the world -- lags terribly in India.

The nation has more people with HIV/AIDS than any other in the world, but until recently the Indian government was in a disgraceful state of denial about the epidemic. Transportation networks and electrical grids, which are crucial to industrial development and job creation, are so dilapidated that it will take many years to modernize them.

Yet the litany of India's comparative shortcomings omits a fundamental truth: China started first. China's key economic reforms took shape in the late 1970s, India's not until the early 1990s.

But India is younger and freer than China. Many of its companies are already innovative world beaters. India is playing catch-up, for sure, but it has the skills, the people and the sort of hustle and dynamism that Americans respect, to do so. It deserves the new notice it has got in the U.S.

We're all about to discover: that elephant can dance.

Anonymous said…
Brother Hassan, you are ever a true son of the Republic! It is true- our nation arises after decades of slumber to take on the world. May the gods ever keep our glorious Republic!