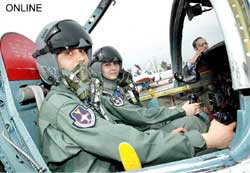 Talking to reporters after the passing out parade at the PAF Academy, Khan, flanked by Nadia Gul, Mariam Khalil and Saira Batool, said that they were proud of joining PAF as cadets. They urged women to join air force “because it is an attractive and honourable service”.

The four women pilots joined the PAF Academy in October 2002 and during three-year stay they had gone through demanding general service training. Two of them are from Quetta, one from Peshawar and one from Bahawalpur. Air Commodore Abid Khawaja told reporters that the women pilots performed well in all fields during their training. He said although they faced some difficulties at the start of their training, they made rapid improvement to overcome all hurdles with hard work and dedication.

He said they had gone through strenuous academic education and rigorous flying training on MFI-17 Super Mushshak and T-37 Jet aircraft. He added that three more women pilots were getting training at the PAF Academy under the 117th GD Course and would pass out within six months. Khawaja said the induction of women GD pilots had been stopped. “We want to check operational fitness of these women officers after which a decision about the induction of more women officers would be taken,” he said.

Vice Chief of the Army Staff General Ahsan Saleem Hayat was the chief guest at the graduation ceremony. The VCOAS staff awarded the Quaid-e-Azam Banner to the 4th Squadron. The trophy for the best performance in General Service Training went to Cadet Taimoor Khan Jadoon. Female Cadet Nadia Gul was awarded with Asghar Hussain Trophy for best performance in academics. The Chief of Air Staff’s Trophy for Best Performance in Flying was lifted by Iraj Jamal. The graduation ceremony also included display of immaculate and thrilling aerobatics by the flyers of Karakoram-8 (K-8 Academy Hawks) and T-37 aircraft (Sherdils). APP