For Pakistan, American Aid Is All Guns, No Butter 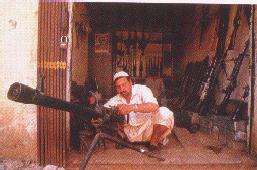 Syed Jawad Ahsan's Valentine's Day this year was a heartbreaking window into the box in which this country is trapped.

Around 10:30 on Tuesday morning, Mr. Ahsan, chief executive of Irfan Textiles Pvt. Ltd., got into his car and headed for the factory just outside town where his workers, some 5,000 of them, stitch and weave underwear for Jockey. As he was leaving Lahore's outskirts, he saw some boys in the middle of the road, setting fire to car tires. A group of Sunni parties had called for yet another of the seemingly never-ending protests against the Danish cartoon caricatures of the Prophet Muhammad, and the boys had apparently decided that torching tires on their own turf would teach the West a thing or two.

Mr. Ahsan threw his car into reverse and started to back away. But behind him, another group had gathered, throwing rocks at a parked car, breaking its windows and slashing its tires. Frustrated, Mr. Ahsan turned left and made a quick exit, heading back to town. Using his cellphone, he called and left a message that I should meet him at his downtown office for our interview on Pakistan's textile industry. "I think it's safer for us in town today," he said.

An hour later, we were drinking Pepsi and eating crackers in his office in Lahore. Mr. Ahsan was visibly saddened. "Pakistan didn't used to be like this," he said. "All this extremism that you see here now is because of Afghanistan."

He meant the Afghanistan war that started in 1979, not the one that came after Sept. 11. The way Mr. Ahsan sees it, Pakistan before 1979 was a much more open society, with wine bars in the cities and a small measure of freedom. But when the Russians invaded Afghanistan, America responded by arming, and largely creating, the Islamist fighters who drummed up religious fire in their war to drive out the Russians. Next door, Pakistan became a front-line state, and American money flooded to the mujahedeen. Ever since, Pakistan has been home to a growing cadre of fundamentalist Islamists, many of them bent on jihad.

With the huge gap here between rich and poor, militants find young boys with nothing to do easy prey. Mr. Ahsan can't fathom why Americans aren't working on the economic conditions that breed discontent.

The United States agreed in 2005 to resume sales of F-16 fighter jets to Pakistan. The sales had been suspended for more than a decade because Pakistan began developing nuclear weapons. But Washington has refused to grant a bigger and far more important concession: duty-free access for Pakistani imports.

If there is a stronger case than Pakistan's for duty-free access, it is certainly hard to find. This place is a breeding ground for Muslim extremists, but it also has a population and government that has, by and large, maintained cordial relations with America. Pakistan's biggest industry is textiles, accounting for 45 percent of its manufacturing jobs, and its biggest market is the United States. Pakistani factories make everything from bras to shirts and sheets for companies like Wal-Mart, Polo Ralph Lauren and Martha Stewart Living Omnimedia.

Since Sept. 11, it's been an uphill battle for such Pakistani companies. American buyers have been skittish about trusting their orders to a place that looks like a war zone on TV. Meanwhile, other countries, including China, Bangladesh and India, have been quick to try to woo business away. The overwhelming belief here is that without duty-free access to the U.S. market, the textile and apparel industry here can't compete.

Mr. Ahsan says his knitwear exports are down 17 percent in the past year alone, and he believes that Pakistan's knitwear industry — the staple of its textile industry — is dying. This week, another knitting factory in Lahore became a casualty: 1,000 jobs will be eliminated, although the workers haven't yet been told.

It is the end of our interview, and Mr. Ahsan and I have spent as much time talking about religion and why Muslims are so upset about the cartoons as we have about trade and textiles. Reaching into his back pocket, he pulled out a Muslim prayer book — he said a friend had given it to him to help him get through the difficult times he is facing as he tries to keep his business together.

He said he was waiting to see whether President Bush's visit next month would produce any new American promises to help Pakistan on trade, but he admits that if past is prologue, Pakistan will come away empty-handed on what really counts. "Textile trade, not F-16's, is the only thing the U.S. should do if at all U.S. wanted to mellow extremism here," he said. "It must be employment."

I left him and headed to a Lahore suburb to meet some friends. About a half-hour later, the mob of boys, now thousands strong, reached Lahore's downtown area, which locals call the mall. They ransacked around 500 cars, burned 75 motorcycles and 10 other vehicles, and torched the Punjab Assembly. A bank security guard opened fire and killed two boys. Three others were shot and injured.

The mob then turned to the business district, setting fire to a Norwegian cellphone company's office and a KFC. Nestled between those two buildings was an office belonging to Mr. Ahsan and his brother. It, too, was burned down.

Anonymous said…
Pakistan is going crazy. It is hurtling from one serious issue to another, with no semblance of a government in any shape or form.

Reading about the sorry plight of Mr Ahsan was bad enough but when I checked out todays (Feb17, 06) Dailytimes online content(http://dailytimes.com.pk/), the situation in Pakistan appeared even worse!

Some of the head lines -

After reading the above content, what Prez Musharaf had to say below sounded almost macabre. He seems to have no clue and is totally oblivious to what Pakistan is undergoing at the moment!

All these links appeared on the same day.

I agree with the assessment of Mr Grare - "Islamic Peril: Myth or reality" (also shown by you in the blog) that unless Army gives up its stranglehold on Pakistan, the hemorrhage will never stop.