Showing posts from August, 2005
Show all

THE WAY IT WAS: My tryst with the Nehrus

“My name is Indira Nehru,” she said. As an afterthought she added, “Gandhi” and said, “This is my son Rajiv.” The little boy was enjoying his milk made from condensed milk which was then imported from Switzerland

The Sherpur family’s association with the Nehrus was a long one. It began in the early twentieth century. The Sherpur Estate like other estates in UP (some of them were larger than those that had been declared ‘states’) had refused the formal status of ‘states’ with its protocol and formality and had many cases pending before the Allahabad High Court and the Lucknow Chief Court. They therefore needed lawyers to appear in the High Court and the Chief Court on their behalf.

While Mahmudabad and Nanpara chose Mr MA Jinnah of Bombay to represent them in the Oudh Chief Court, Balrampur and some taluqedars of Oudh and the Sherpur Estate of Rohilkhand chose Pandit Moti Lal Nehru.

Islamabad, Pakistan -- PAKISTAN AND THE WEST have targeted this country's Islamic seminaries for a major overhaul, identifying them as primary sources of militancy and terror. But some critics say the country's abysmal public-education system also enables extremist thought to flourish in the nation and that too little is being done to remedy the situation.

Pakistan's president, Gen. Pervez Musharraf, recently launched a fresh crackdown on the madrassas, as the seminaries are known, where many of Afghanistan's ousted Taliban leaders and their followers were educated. He faces renewed Western pressure to confront militancy within the country's borders since the July 7 London bombings, which were carried out principally by young men of Pakistani de…
Post a Comment
Read more

Bangladesh on path to religious extremism?

By Prof. Taj Hashmi
Special to the South Asia Tribune

VANCOUVER, Canada, August 25: It is very disturbing indeed, that two innocent people died, hundreds wounded and millions terrorized by a spate of synchronized bombings in 63 out of the 64 district towns of Bangladesh, including the capital Dhaka, on the morning of 17th August between 10:30 and 11:30 am.

Around 400 “home-made” bombs, with not-so-crude electric timers, came off in government offices, court houses, public parks, universities, airport, and shopping centers and on roadsides. Although the number of dead and injured is relatively smaller, in comparison to the toll of roadside bombs in Iraq, yet the message is very clear, ominously frightening, for those who do not want Bangladesh turn “Islamic” or instable for an indefinite period.

The most alarming part of the story is not the first most synchronized bombing in history, at …
Post a Comment
Read more

Talking at Jamia Mosque’s Syed Maududi Institute, Idrees said the country’s rulers were following a foreign agenda and it was imperative to launch Jihad against them by mobilising the people. He condemned the ban on magazines Friday Special, Zarb-e-Islam and Wajoud. “The only fault of these papers was their commitment to expose Western and the ruling party’s double standards,” he added.

The JI leader said the local council elections had been compromised when the Sindh government “allowed” the Muttahida Quami Movement (MQM) to forcibly confiscate ballot boxes. He said the electoral staff was caught filling ballot boxes with bogus votes in Karachi. He added that t…
Post a Comment
Read more

LAHORE: Each year, thousands of Pakistani children learn from history books that Jews are tight fisted moneylenders and Christians are vengeful conquerors, the Los Angeles Times reported on Thursday. One textbook tells kids they should be willing to die as martyrs for Islam, it added.

“They aren’t being indoctrinated by extremist mullas in madrassas, the private Islamic seminaries often blamed for stoking militancy in Pakistan. They are pupils in public schools learning from textbooks approved by President Pervez Musharraf’s administration,” LAT reported.

“Since joining the US as an ally in its ‘war on terror’ four years ago, Musharraf has urged Pakistanis to shun radical Islam and pursue ‘enlightened moderation’,” it added.

“Musharraf and US officials say education reforms are crucial to defeating extremism in Pakistan, the only Islamic…
Post a Comment
Read more

According to a reply filed by the government in response to a question in the parliament on Thrusday, the states without madrassas are Arunachal Pradesh, Meghalaya, Mizoram, Nagaland, Pondicherry and Jammu and Kashmir – a surprising occurrence since the state is India’s only Muslim dominated region.

The states of Kerala and Madhya Pradesh have the most number of madrassas with 6,000 in each. They are followed by Uttar Pradesh (4,292), Bihar (4,102), Rajasthan (1,985) and Gujarat (1,727). Even remote areas like the Andaman and Nicobar Islands have 54 madrassas. The states of Sikkim and Goa have only one registered seminary each. The government report says that th…
Post a Comment
Read more 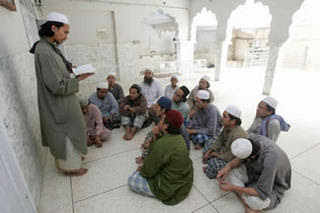 KARACHI/QUETTA: Registration and annual audits have been made mandatory for religious seminaries operating in Sindh and Balochistan, by amendments to the Societies Registration Act 1860, introduced on Monday.

Sindh Governor Dr Ishratul Ibad promulgated the Societies Registration (Sindh Amendment) Ordinance 2005 under which no seminary can be established or operated in the province without being registered under the act.

A new section, 21, has been included in the 1860 Act, with four clauses. Clause 1 of the new section says, “All Deeni Madaris (religious seminaries) shall not be established or operated without being registered under this act and shall be subject to the provisions of this act in addition to what is provided in sub-sections (2), (3), and (4).”

Clause 2 of the section says all seminaries will have to submit annual reports of their performance to the registrars concerned.

Amazing are the ways, to the point of madness, at least in Lahore, where dozens die in road accidents on the occasion, the people celebrate Independence Day in Pakistan. Such great enthusiasm is seldom seen on any other occasion, nor, perhaps, is it seen in any other newly independent nation, including India. Last year, when I was driving my Indian friends through Lahore on the Day, they were really stunned to see the enthusiasm. The greater the sense of alienation, the higher is the resolve to commemorate one's nationhood. Isn't it fantastic? And this is what surprises me most and keeps my hopes in my country. I am two years younger to Pakistan and have grown though all its ups and downs and, interestingly, my failures in life are similar to that of Pakistan's. Despite decades of efforts we have not achieved w…
Post a Comment
Read more

LAHORE: Hate-provoking religious literature is being openly and freely disseminated in government offices including the offices of senior bureaucrats in the Punjab Civil Secretariat, Daily Times found on Thursday.

Even though such banned religious material has been in most government departments, only the Punjab Home Department, announced that they were confiscating the material immediately.

“We don’t know who the person is, but he visits the offices regularly and distributes …
Post a Comment
Read more

ISLAMABAD: The government has approved an ambitious Rs 1.4 billion project aimed at automation of complete policing record including the crime details in all 1,350 police stations of 120 districts of Pakistan.

To be initiated from capital police stations and intended to be completely implemented all over Pakistan in 36 months, the project would help create an easy accessible countrywide database of all criminals, crime registered, absconders etc besides the details of police officials and their career details.

Project named as Police Record and Office Management Information System (Promis), was prepared by the National Police Bureau of the Interior Ministry. In its last meeting on August 4, the Ecnec has approved the project and allocated Rs 1.4 b for its immediate implementation.

Maulana Fazlur Rehman, chief of his own faction of Jamiat Ulema-e-Islam and leader of the opposition in the National Assembly, has lashed out at the government. He has tried to achieve multiple objectives through his Sunday press conference in Lahore. Despite a late and indirect denial of the central element of his statement against the government, most papers covered his views, albeit with different headlines.

This is explosive stuff. Why would Mr Rehman choose to make such sweeping allegations? The ans…
Post a Comment
Read more

August 02, 2005
Why tolerance is not on the curriculum in Pakistan
By Ahmed Rashid in Lahore
Daily Telegraph
July 31, 2005

For almost 30 years the most famous words of Pakistan's founder, Mohammed Ali Jinnah, have been absent from school and military college curricula.


Cleric teaches the Koran in the family village of suspected London bomber Shehzad Tanweer
He clearly envisaged Pakistan as a democratic, not a theocratic state, but in the 1970s his words were blacked out by the military regime allied to Islamic fundamentalists helping the Afghans and Americans fight the Soviet Union in Afghanistan.